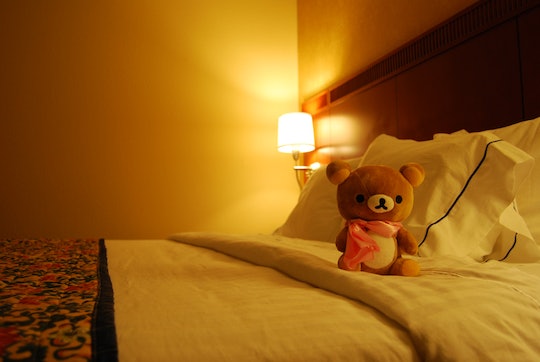 Moms Are Happier When Kids Have an Early Bedtime, So No, We Cannot Read One More Book

Next time your child begs for fifteen more minutes of TV before bed, you've got a science-backed reason to say no. Researchers at the Murdoch Childrens Research Institute and the University of New England in Australia found that kids are healthier and moms are happier when kids go to be early. Based on info collected from 3,600 children 8 to 16 years old, the study concluded that having lights out no later than 8:30 p.m. is as good for kids' physical health as it is for mothers' mental health.

The results showed that the kids in the early-to-bed groups were in better physical shape and their mothers in better psychological shape than those in the two other groups. The study also indicated no relationship between bedtime and mental prowess, behavior, or how much they weighed.

There's some dispute on that last point. According to AJP.com.au, another study presented at Sleep DownUnder 2015 found that going to bed late correlates to a higher BMI and fewer healthy habits in kids. Though climbing into bed at midnight gives bragging rights to any elementary schooler, it's not necessarily what they need. Yahoo! Parenting reports than an early wake-up and an early bedtime line up with a child's circadian rhythm.

Moms probably don't need to be told that early bedtimes benefit them as well, although go you, Researchers, for gathering the hard data to back that up. Evening is the only alone time parents of small children get, so when kids go to bed early, there's more time for you to do this:

and maybe even a little of this:

Moral of the story: You don't need to feel guilty about sending kids off to bed early. What feels like a treat to you is actually a gift to them, too.