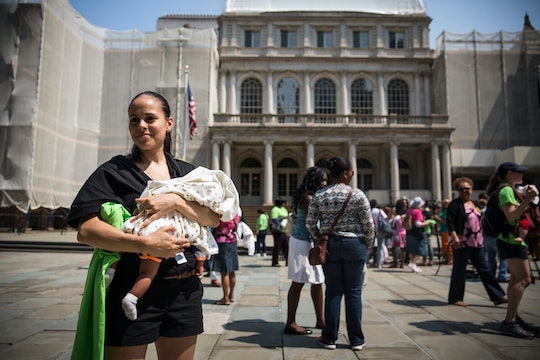 Moms Are Not Breastfeeding Long Enough

Most new moms are told that breastfeeding is a great option when it comes to raising your children. Breastfeeding is rich in health benefits for your baby, for your own body and most importantly, it doesn't cost a penny. There are many reasons why women decide to stop breastfeeding their babies, but they might want to hold out just a little bit longer before ending their feedings. Why? Because a report found that moms are not breastfeeding long enough — which is a shame because breastfeeding is incredibly beneficial.

The report, conducted by the Lancet, found that longer global breastfeeding would advert the deaths of over 800,000 babies. According to Fit Pregnancy, the report also found that the United States could save over $3 billion if women increased breastfeeding rates to infants under 6 months to 90 percent.

But just how long are women in the United States breastfeeding their babies for? A 2016 report conducted by the Centers for Disease Control and Prevention found that out of the 81.1 moms who ever tried breastfeeding during their pregnancy, there was a significant drop in the amount of women in the United States who continued to breastfeed after six months of their baby being born from the time they were born. And the percentages drop even more, the older the babies get.

Moms might not be breastfeeding their babies long enough not because they don't want to but because they can't. A 2012 study published in Pediatrics found, according to TIME, that out of mothers who wanted to breast feed exclusively for the at least three months, only one-third of those mothers met their goal. This can be traced to breast feeding babies immediately out of delivery and not receiving supplemental formula or pacifiers in the hospital, TIME reports. You can't blame women for not breastfeeding their babies long enough due to personal reasons and things they can't control. But, the facts still stand — breastfeeding babies longer benefits babies health and has some serious benefits to the economy.