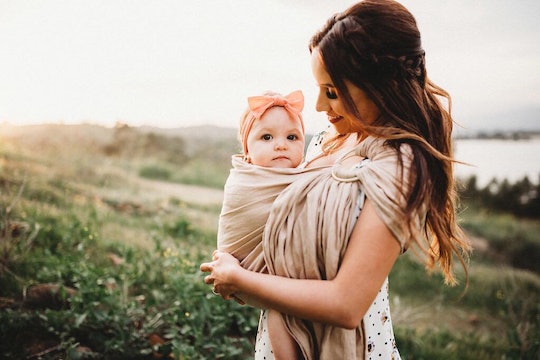 “It was a whole community of moms that discussed everything relating to parenthood and life in general,” Shaley Clements, age 32 and living near Los Angeles, tells Romper. “I was surprised to find out that it was more than just a ‘babywearing’ group.”

Clements is just one of countless moms who will quickly admit to really loving babywearing. You might even call her obsessed. There’s Clementine Gallop, a 33-year-old mom of one, who relied heavily on babywearing in order to be able to get from place to place.

“I live in London and our Underground is extremely inaccessible with a stroller, especially in my part of London,” she says. “This meant I carried on using the Ergobaby much longer than I might have done otherwise.”

Julie Perry, and 29-year-old mom in Charlotte, tells Romper she simply wants to get a little exercise but her 2-year-old doesn't ride in the stroller anymore and isn't exactly a speed walker. Toddler-wearing to the rescue!

And there’s Danielle Antosz, a 35-year-old living in Chicago, who loves that babywearing makes all the multitasking she does as a mom of two a little more doable.

“I can nurse and cook, hold a sleeping baby and sweep, work and cuddle,” she tells Romper. “I love that it gave them the closeness they crave while giving me my hands back!”

For Clements, her obsession began with a Solly Wrap she saw on social media. She was pregnant with her first at the time and it seemed like a comfortable way to keep her daughter close after she arrived.

So, she ordered one. Then, she joined the Facebook group associated with that specific carrier to get some tips on proper babywearing practices. It wasn’t long before she was turning to this group for answers about all-things parenting, including breastfeeding and sleep-training troubleshooting. She came for a little help and found a whole community of mom-friends.

I proudly wore my daughter everywhere during her first year of life.

Our conversation with Clements begins with the hope of answering a question that’s been on our mind — why are moms so obsessed with babywearing?

It quickly becomes clear that the answer isn’t as straightforward as we thought it might be. While the obvious is true — that babywearing helps busy moms get more done — it’s clear there are also a lot of emotions tied to the practice.

“Once you get your baby in correctly, you feel like a badass,” Clements says. “I proudly wore my daughter everywhere during her first year of life, and it’s one of the things I miss the most about her infancy stage.”

Antosz says her connection with babywearing began long before she was a mother, as a teen volunteering in her church’s summer school camp nursery wearing a teacher’s baby in a sling. She recalls just how important she felt having a baby that liked her, especially as the youngest in her own family. Now, as a mom, she’s owned eight different kinds of carriers and wraps.

There is also what we know about babywearing that attracts caregivers to this practice, that it can be beneficial to both mother and baby. One research review published in Creative Nursing in 2016 suggested potential benefits of babywearing to mimic those of skin-to-skin contact which include improved language development, stronger core muscles, and secure attachment between parent and baby.

“Putting them into a carrier that keeps them close to mom really mimics the womb,” explains Alyson Daley, a Certified Babywearing Educator serving parents in South Florida. “So, it helps them to regulate body temperature and breathing. It helps to bring in mom’s milk and remind baby that mom is there and where their food source is.”

My son was born prematurely. I spent a lot of time doing skin-to-skin with him in those weeks we spent in the NICU. When we finally brought him home, wearing him felt natural.

For Kelly Glass, age 33 and living in Illinois, babywearing made sense after a difficult pregnancy, which included hyperemesis gravidarum, a cervical condition, and bedrest, and premature birth for her son.

“I spent most of [my pregnancy] in my bed or a hospital bed, so I talked to my bump to keep me sane,” she says. “My son was born prematurely. I spent a lot of time doing skin-to-skin with him in those weeks we spent in the NICU. When we finally brought him home, wearing him felt natural.”

There is also this surprising community that something like babywearing provides. Thanks to social media, you can get online and find people who are into the same things you’re into. Then, that common interest can become the basis for a connection that goes beyond babywearing or cloth diapers or breastfeeding and becomes about feeling like you belong or like Clements, that you have somewhere to turn when you have questions about being a mom.

Daley also points out how babywearing has experienced a resurgence in popularity in the last decade. Manufacturers are taking advantage of that, developing different baby carriers, creating options that weren’t available five, ten, or 15 years ago. With that, it has created the same reaction we see with trendy shoes, clothes, or cars — the exclusivity of owning the best model.

She describes watching parents buying highly desired carriers for $700 or $800.

In the world of babywearing, this has played out as an incredibly competitive buy, sell, and trade community. Spend a few minutes in one of these groups on social media and you’ll likely need a reference sheet for interpreting the lingo. There’s the terminology for defining the carriers themselves, like half-buckle, hybrid, soft structured carrier, and shorty, along with the buy, sell, trade lingo like DSOT (desperately in search of), HTF (hard to find), and OOAK (one of a kind).

Our personal favorite? IVDSOT, or in very desperate search of. It’s this attitude that seems to drive the competitive buying environment, the idea that this print, this limited edition release, this hand woven, one-of-a-kind carrier is the purchase your carrier or wrap collection is missing.

“I feel like they had a beanie baby moment,” Antosz jokes when she describes watching parents buying highly desired carriers for $700 or $800. “Those same women complained that they couldn’t sell those carriers for what they purchased them for a few years later.”

Interestingly, although not all carriers resell well, babywearing purchases as a whole do have an incredibly high resale value. Well-cared for, even mass-produced items can resale for close to their retail cost while small batch wraps or carriers often turn a profit.

Unfortunately, the exclusivity of the community both attracts and scares parents away. When babywearing becomes something more, when you belong to the group because you’re buying into an exclusive subculture defined by expensive, hard-to-find purchases, other parents get left behind.

Daley has naturally seen babywearing parents fall into two camps. There are the mainstream parents who are using a carrier bought at a big box store because it’s a necessity — their baby won’t sleep or won’t stop crying. And then there are the crunchy, or natural parents, who feel babywearing is a part of their identity.

“Those that are buying it because they like the textiles it is made with, and the way this functions, and the community it comes with,” she explains.

The goods news is that the community doesn’t have to be exclusive. The benefits and convenience of babywearing isn't reserved for those privileged enough to have the extra funds. In fact, educators like Alyson are working to create better access to babywearing resources in lower income communities. She’s a part of an informal movement of babywearing educators in South Florida trying to cut through the competitive buying and exclusivity and connect with mothers who simply can’t, or won’t, buy into an expensive carrier hobby.

Ultimately babywearing is a tool that can help all types of mothers to mother well, and that is an opportunity that shouldn’t come with a price tag.