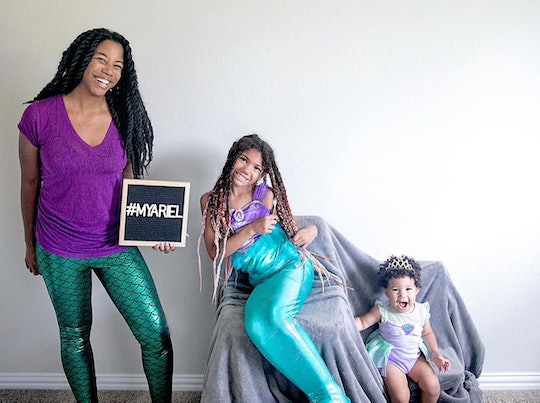 Disney’s casting announcement for its upcoming live-action remake of The Little Mermaid unfortunately sparked mixed reactions when the company revealed Halle Bailey, a Black actress, would be taking the lead role. A racist backlash ensued, with certain users on social media lamenting the inclusive casting. However, plenty of others have been celebrating the exciting announcement — in the most adorable way. In fact, moms have been sharing photos of their kids dressed as Ariel and their favorite princesses to show exactly why inclusion and representation matter so much.

Blogger Courtney Quinn started the hashtag #ColorMeMermaid to share why it was so important to see characters who look like you on TV and in movies. "I grew up in a predominantly white town and have been hurt by racial comments before, so reading those comments brought back a familiar pain. I didn’t understand how people would want to 'bully her into quitting' or could claim that she’s 'not their Ariel' because she didn’t fit some 30 year old mold of a mythical creature," Quinn captioned a photo of herself and seven other women dressed as mermaids. She added on Instagram, "instead of letting those words sting I decided to do something about it & infuse some positivity into your feed!"

And so Quinn launched the #ColorMeMermaid project on Instagram "in hopes of bringing some positivity to this exciting announcement."

Quinn tells Romper that her objective for her entire brand, Color Me Courtney, is to spread positivity and shared that the hashtag was her own way of responding to the less-than-loving backlash that Black Ariel generated, as she saw it as a net positive (which it very much is). "My response to negativity has always been positivity, I couldn’t control how these comments made me feel but I could control my reaction," she says. Since the hashtag kicked off, Quinn tells Romper "there was so much positivity in the responses."

"... If they were anything but positive I wouldn’t have known, most of the people who said something were joining the movement or spreading light," Quinn says. "Some reactions were people sharing how the movement changed their minds. I’m sure there were people who were upset by what I posted and unfollowed or even blocked me, but I didn’t notice."

Jennifer Borget was one such mom who decided to participate in Quinn's project, posting a photo of herself and her two little girls dressed up as Ariel on Instagram. "I can imagine how all of the red headed little girls felt when The Little Mermaid hit theaters in 1989. A beautiful Disney princess on the big screen who looked like them! All of the dolls and fashion that followed and people all over admiring those gorgeous red locks. Shoot, I even donned a red wig for Halloween the next year. Ariel was da bomb! And so was red hair," she captioned a photo of herself posing with her daughters.

"Now imagine how my little girls will feel when the world gets to see an Ariel with dark skin," her caption continued. "And all of the little girls around the world who will get to see and enjoy an additional version of the princess we all love. Get that? Additional. We lose nothing and gain so much with this new version of Ariel."

Borget tells Romper that when she was a little girl, The Little Mermaid was one of her favorites. "I'm a black woman but growing up Ariel was one of my favorite princesses. She looked nothing like me but I still loved her. When I was in Kindergarten I wore a mermaid costume with a 'nude' midsection for Halloween that was no where near my color of nude," Borget says.

Borget says she, as well as her daughters, have had "so many of [Ariel's] dolls and clothing through the years," and when they've gone to Disney World, met the version of Ariel they grew up with. And, according to Borget, "None of that changes with this new casting of Ariel. We aren't erasing the past. We are adding more for future generations. In this day and age of all of the live action remakes there's so much opportunity for these movies and characters to evolve, and not just being a carbon copy of the original."

Other mothers and women like Borget have been posting photos of their children dressed as Ariel and other Disney princesses as well, sharing how important it is for their children to know they belong in mainstream culture.

One mom, blogger Paula Presents, shared a photo of her daughter dressed as a princess as part of the #ColorMeMermaid campaign, writing on Instagram, "This is why inclusion is important and little black girls need more representation in the everyday things that all little girls like."

She continued, "When the news of the new Ariel came out I was happy because Halle Bailey is super talented and honestly it is super cool that my daughter is in a generation that the little mermaid looks like her and also a time where talent and charisma for the role counts more than what a fictional character looks like."

Another mom, Kim Ballesteros, also shared a photo of her daughters dressed as princesses at Disney World, captioning the shot: "I must admit, I didn’t really care about who was casted for @waltdisneyworld Ariel. I mean I was excited of course but I didn’t see the importance. That has changed, after I told the girls they had casted Halle... they were sooo excited! ... To hear my little #aftolatinas get excited about having 'another black princess' made me see the importance of it all."

For her part, Quinn suggests that everyone should "fill their feeds" with those who represent them best.

So yes, the photos are adorable, but much more significantly, they are showing the real life impact that diverse media has had on children and families. It is important to see yourself represented on screen, as it fosters feelings of legitimacy, validation, and belonging. As Borget noted on Instagram, it takes nothing from anyone. Diversity only adds to the joy of princesses and the wonder of being a little kid.

Editor's Note: This article has been updated to include quotes from Courtney Quinn.

More Like This
Harry Styles Running To Hug His 78-Year-Old Super Fan At The Grammys Will Make Your Day
Watch An Exclusive Sneak Peek At 'The Amazing Maurice'
'Women Talking' Is A Powerful New Movie Based On A Book
Marcel The Shell Is Heading To The Oscars!
What Parents Are Talking About — Delivered Straight To Your Inbox