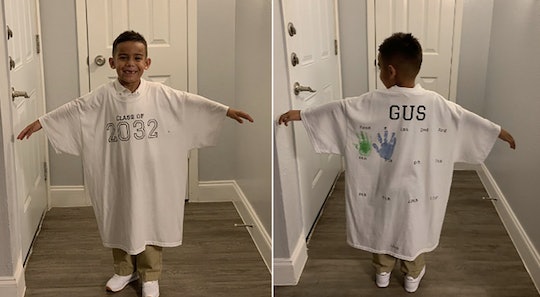 There are many back-to-school traditions, a common one being when parents pose their kid next to a chalkboard with their grade written on it. Although there's nothing wrong with this ritual (it's my personal go-to), you might want to check out this mom's back-to-school tradition for her son if you're looking for something a little different this year. The adorable idea has gone viral, and it's not hard to see why so many parents love it.

When Texas mom Carina Cansino tweeted a photo of her 5-year-old son, Gus, on his first day of school, she probably had no idea it would go viral. But that it did. On Aug. 19, the young mom from Dallas took to Twitter to share a photo of Gus wearing an oversized T-shirt, writing, "Let's begin the first year of elementary," and to days later, her tweet has been shared more than 33,000 times and has received over 210,000 likes. And it isn't hard to see why.

If you look closer, Gus' shirt says "Class of 2032" on the front of it, signifying the year he will graduate from high school. Meanwhile, the back of the shirt has a spot for Gus to place his handprint every single year. Seriously, isn't that such an amazing keepsake?

"The concept is that every year on the first day we take a picture of him in it and by his senior year he will fit in the shirt," Cansino explained in another tweet. "And we’ll get to go through every school year photo and watch his growth."

The creative mama started the tradition last year, when Gus went into Pre-K.

On Twitter, Cansino shared even more information about their backstory. "I had Gus when I was 15 and was a single mom for many years," she wrote, along with a link to her YouTube channel. "I’d love to share my story through my channel and inspire other young women to be and do better and keep striving."

Oh, and in case you're interested in buying a shirt exactly like this one for your own kiddos, you're in luck because it looks like Cansino already has something in the works.

"I’m in the process to start selling the shirt for your kiddos!" she said. "Please give me a week to gather what I’ll need, prices, etc!"

"Gotta go home and tell my 5yr old he's famous," she wrote with a laugh-crying-faced emoji. "What a great first day of school!" Evidently, Gus was pretty thrilled about the attention his photo has received.

Another Twitter user wrote, "Dude I need the Netflix version of this, I want to be able to binge the next 12 years of this kids life by the end of the week."

One person even set a reminder on his calendar for Aug. 20, 2032 to "Check this Twitter post." LOL. If Twitter even still exists by then, that is...

To be honest, the only back-to-school tradition my family follows is when I force my kids to pose for a quick photo while wearing their backpacks on the first day of school. But this mom's idea puts my lazy kid-documenting skills to shame.

Hopefully, when 2032 rolls around, Cansino will remember to share the entire transformation of Gus wearing his shirt throughout the years. I know I'll be keeping an eye out!

More Like This
30 Instagram Captions For The First Day Of First Grade
Where To Buy School Uniforms, From Jumpers To Dress Socks
How To Build An After-School Routine That Works For Your Family
The Best Back-To-School Sales To Shop Right Now