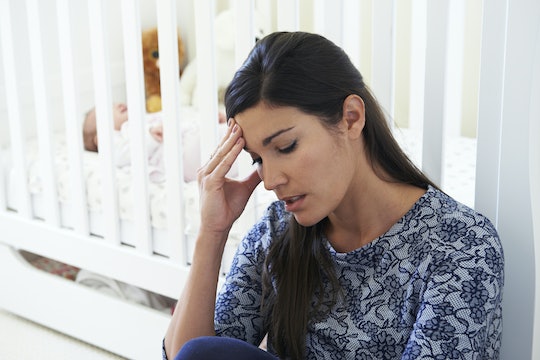 Your Depression Could Impact Your Kid's IQ, Study Says, & Here's What You Need To Know

Studying the impact depression and postpartum depression have on mothers and their children is something experts need to focus more on, because it's still a very real problem. Speaking of that problem, new research says chronic depression in mothers can impact their child's IQ, which is more evidence that depression doesn't always just affect the person who has it. It also shows that we have more work to do when it comes to supporting moms and families who are dealing with depression and other mental health concerns.

Researchers from University of California (UC) San Diego recently surveyed around 900 healthy children and their mothers living in Santiago, Chile, checking in at five-year intervals from when the children were infants until they turned 16, according to The Economic Times. The kids were assessed on "verbal cognitive abilities" by using standard IQ tests, and the mothers were tested for different symptoms of depression. And the results were very concerning to the researchers.

The main question here is, how would that depression impact a child's IQ? East said, according to The Daily Mail:

And while the difference in IQ scores might look small on paper, East insisted that they are significant. She added, according to The Daily Mail:

Although seemingly small, differences in IQ from 7.78 to 7.30 are highly meaningful in terms of children's verbal skills and vocabulary.

Our study results show the long term consequences that a child can experience due to chronic maternal depression.

The point is, depression is something that a lot of people deal with. And we are still working on ways to understand and manage it. Studies like this one from UC San Diego — published in the April issue of Child Development, according to Neuroscience News — will hopefully help experts have a better understanding of how depression doesn't just impact the people who live with it, but their children and the next generation.

The key here, like many studies that come out about maternal health, is that moms need more support, period. East agreed, and said, according to The Daily Mail:

For health care providers, the results show that early identification, intervention and treatment of maternal depression are key.

Providing resources to depressed mums will help them manage their symptoms in a productive way and ensure their children reach their full potential.

East spoke about specific reasons mothers in the study were depressed, and some of them may sound familiar to other moms. She said, according to The Economic Times:

For mothers in the study, there were many stressors in their lives. Most of the mothers, while literate, had only nine years of education, were not employed outside the home and often lived with extended family in small, crowded homes - factors that likely contributed to their depression.

So stress and limited education seemed to be a big factor for these moms. But further analysis is needed, and the authors behind the study said future steps could include looking at data to see how a mothers's depression can affect their children's own depressive symptoms through childhood and adolescence.

Researchers may also analyze data to see how a mother's depression may impact a kid's academic achievement and health — like their chances of being obese, according to EurekAlert, a science news site sponsored by the American Association for the Advancement of Science.

Depression is a big enough worry as it is, and mothers shouldn't feel guilty about hurting their kid's development because of their own mental health concerns. The bottom line is, there's clearly work to be done when it comes to understanding depression and helping to support moms as a society, and studies like this one help us to better understand just how important that support and research really is.