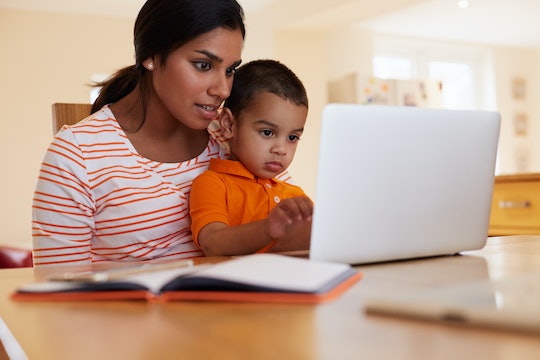 The "Mommy Track" Is Still Real, So Here's What Working Moms Need To Know

In 2005, Cornell University researcher Shelley J. Correll found that women make less money for every child they have. It's clear that problems involving treatment of women in the workplace have far from in the past. In fact, just last week Google CEO Sundar Pichai admitted the company has a troubled history with sexual harassment, as CNBC reported.

In the Cornell study, researchers sent dummy resumes to hundreds of employers and found that mothers were half as likely to be called back by prospective employers. Fathers, meanwhile, were called back more often than men whose resumes did not mention parenthood.

Newer players have sought to find out if things are improving. When Hillary Frank, host of the podcast The Longest Shortest Time, got her hands on the Cornell study, she decided to tackle the topic anew. Her resulting series, It's A Real Mother, outlined some of the common types of bias working moms face, what to do about it, and how society can flip the script.

"It’s illegal to discriminate against a person in the workplace for being a parent,” Frank told Fast Company . “But bosses get around it in all different kinds of ways.”

One of the most common types of discrimination to look out for, according to Frank and others, is pregnancy and maternity discrimination, in which moms-to-be and new moms find their status at work has changed suddenly due to upcoming or recent childbirth, according to the United States Equal Employment Opportunity Commission.

This pattern is still all too common, according to Parents. The minute you announce your plans for a family are moving forward, keep an eye out for subtle or over-the-top signs that your personal life is putting you in the discrimination firing line.

This can include, according to the EEOC, anything from being excluded or reassigned from projects; getting attitude when you come back from doctor's appointment; being disinvited to future seminars or upcoming business trips; being denied a raise, or noting that past talk of a promotion has dissipated.

A related type of discrimination, according to the EEOC, is pregnancy harassment. If you experience this (and I hope you don't) it probably won't be too subtle: Look for direct comments that your job may not be available when you come back from leave, too many questions about whether you might want to stay at home as a "traditional mom," or even inappropriate comments regarding your pregnancy and bodily changes. Ick.

In other words, anything related to your pregnancy that has resulted in an hostile work environment can constitute pregnancy harassment. For moms who have had their babies, gone back to work, exhaustion and all, and dealt with fast-track sidelining and who knows what else, a perhaps even-more-dangerous form of mom bias exists — family responsibility discrimination.

According to the non-profit Workplace Fairness, this basically means that, because everyone at work knows you are a caregiver to other humans outside of the office, you get penalized for not being solely dedicated to the company. You might end up losing out, either on plum assignments or the inside track on what's happening in the boardroom. It can look as obvious as retaliation for the mom who was forced to stay home with a sick child or as indirect as being left out of such career-advancing details as drinks with the boss and his or her inner circle.

According to the Chicago Tribune, this type of discrimination is rife in the workplace, and increasing numbers of employees are facing the problem, including those needing to care for an elderly family member. And as The Atlantic reported in 2017, the number of caregiver-discrimination lawsuits has tripled over the last 10 years or so, according to research from the Center for WorkLife Law at the University of California, San Francisco.

It's really incredible to think that such bad boardroom behavior still exists. A 2016 article from the UK's Daily Telegraph noted that three-quarters of British moms polled experienced discrimination at work.

In short, there’s a shocking amount of stigma still attached to being a human who works and is raising the next generation of humans. Luckily, celebrities and other influencers are refusing to stay silent. "I want women and men to be able to be full-time parents or full-time working people or any combination of the two," actress Natalie Portman told Elle UK in 2013.

I think one of the problems here is that, in the face of ever-increasing workplace competition, no one feels they can be generous. If corporate America made employees feel valued enough, they would support each other more — the new mom in a caregiver crunch might know her colleagues have her back, and when they in turn need a little extra help down the road, she'll be there for them too.

More Like This
What Parents Need To Know After DEA Issues Warning About "Rainbow Fentanyl"
23 Frightfully Fun Facts About Halloween
Where To Go Pumpkin Picking In Texas
Can Elderberry Help Prevent Illness In Kids? Doctors Weigh In