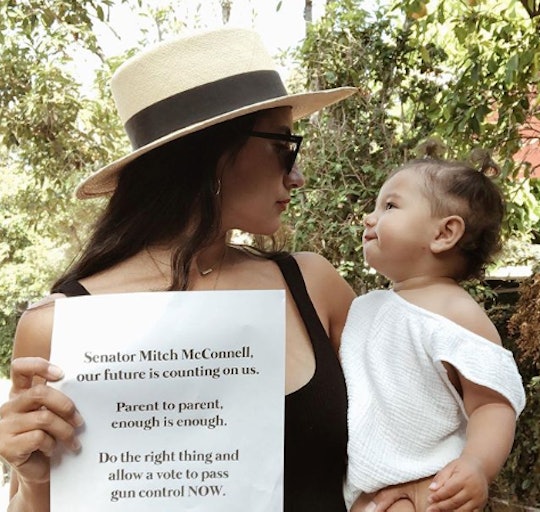 In less than 24 hours, two mass shootings across the nation claimed the lives of more than 30 people earlier this month. Since the beginning of 2019, data from the nonprofit Gun Violence Archive notes there have been more mass shootings than there have been days in the year. It’s a chilling reality to live in, yet some have become numb to such senseless acts of violence. But one growing and impassioned community on social media certainly is not. Dozens of mothers are calling on Senate Majority Leader Mitch McConnell to take the necessary action to end gun violence by allowing lawmakers to vote on legislation that could help curb these grim statistics.

On Monday, Aug. 12, Natalie Alcala, the founder and CEO of Fashion Mamas — an online community of mothers in fashion, art, design, media, and entertainment — started the hashtag #FMGunControl calling on fellow mothers to urge McConnell to "allow a vote to pass gun control" legislation that’s been stuck in "limbo" for several months.

"Mass shootings have taken place in schools, in stores, in malls, in churches, in theaters, in bars — all places that are part of our daily lives," Alcala's Instagram post reads. "While the urgency to end gun violence in our country is glaring, [McConnell] — a father of three — said the Senate will discuss measures aimed at addressing gun violence in September — not now. We need his help NOW."

Just days after the mass shootings in El Paso and Dayton, McConnell told WHAS radio in Kentucky on Aug. 8, according to NPR, that the Senate will begin to discuss gun violence prevention measures in September and he has not changed his stance on the matter since, which is why Alcala has called on her community to demand action.

McConnell's team had not responded to the campaign as of Wednesday night and did not immediately respond to Romper's request for comment.

Alcala tells Romper that she was motivated to create the #FMGunControl campaign in a "DIY" fashion so that "all members across the country could participate."

"We are angry, but rather than tap into that energy, we wanted to focus on the humanity behind our message," she explains. "Senator Mitch McConnell is a father of three, so our hope is that as a fellow parent, he will soon choose saving lives over saving his pockets. We have already successfully flooding his voicemail inbox, so we are now moving on to email. We know he sees us, and we're not giving up."

Kicking off the movement, Alcala shared a photo of herself with her baby in her arms as she held a sign that reads: "Senator Mitch McConnell, our future is counting on us. Parent to parent, enough is enough. Do the right thing and allow a vote to pass gun control NOW."

The #FMGunControl hashtag quickly took off, with dozens of moms sharing photos of themselves with their children, holding the same sign. One mother who participated, Ashley Fultz, style expert and lifestyle blogger behind The Style Editrix, tells Romper that she is "so passionate about making gun control a reality and keeping families and kids safe."

"There are a lot of reasonable laws that should and can be passed that are supported across the aisle which can save a lot of lives," Fultz says. "We need politicians, like Mitch McConnell, to show us people's lives are more important than the NRA's pocket. It's ridiculous at this point and so frustrating. Every mom I talk to is terrified to send their kids to school this fall. Something has to change."

Devon Kisgen, a mother of two daughters from Los Angeles, tells Romper that she feels passing gun violence prevention measures "is such an important issue and it seems like no one is making any moves."

"Time is of the essence because it keeps getting worse," Kisgen says. "I know so many moms that are genuinely scared for their children and seem helpless so anything lights a fire under the people that can actually make change I am 100 percent behind."

Heidi Stevens, mother and founder of the Feminine Collective based in Los Angeles, shared in her Instagram post that she worries that "mass shootings are becoming normalized.⁣⁣"

"While I’m not proud of this, I find myself having less of a reaction when I see the notifications come through my phone. I think there’s part of me that blocks it out because if I’m honest with myself, the regular occurrence of what’s actually happening is just too painful," she writes. "But the very sad, heartbreaking truth, is that it is a reality. And we all need to be diligent to not let this normalize."

Melissa Rappaport, who shared a photo with her son Axwell as she held the sign, tells Romper she's passionate about this campaign because, like so many parents, she doesn't "want to be scared" to send her child to school every day.

"One man can turn the tide, but he won't... People say not to post politics on social media, but this is too important," she says. "It's life or death — literally. I've never seen such a strong positive reaction to any Instagram post I've made, which shows that moms are mad and there is power in numbers."

More and more moms have continued to share their photos with their children with the message directed at McConnell.

Adding to the motivation to get involved in the #FMGunControl, Fashion Mamas will donate $5 to the nonprofit Everytown for Gun Safety. As this passionate, fed-up group of mothers have voiced, the sense of urgency to address the gun violence epidemic in the United States has never been higher and "enough is enough."