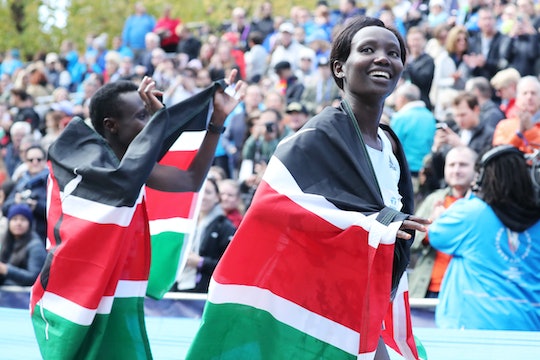 These Moms Absolutely Dominated At The New York City Marathon

Moms are a powerful force to be reckoned with, this we already know. But moments that display just how truly unstoppable and remarkable they are deserve to be celebrated. As such, I'm delighted to report that moms totally dominated at the NYC Marathon this year.

Over the past weekend, the largest and one of the most prestigious marathons in the world went down and although more than 50,000 people crossed the finish line on Sunday, the top two overall females at the 2019 New York City Marathon were — you guessed it — moms.

The female champion, Joyciline Jeposegei, 25, completed the 26.2-mile race in 2 hours, 22 minutes, and 38 seconds, CBS News reported. (This is just 7 seconds off the course record, by the way). Even more impressive? Although Jeposegei is the current world-record holder in the half marathon, Sunday was the first time she had run a full marathon — and she totally crushed it. Add this to the fact that she has a 6-year-old son, Brandon, and well, she's just phenomenal.

Meanwhile, the second-place finisher at the NYC Marathon, Mary Keitany, is a mom of two. The four-time champion of the race came in 53 seconds behind Jeposegei, according to ESPN. Ahead of the race on Sunday, Keitany shared a little insight into what it's like managing the demands of motherhood and elite running.

"It is not easy to come back from maternity or from raising your young child and maintain your best levels," she told CNN. "We see so many women athletes struggle to come back. There are so many challenges and many can't cope." Keitany went on to say that she's "lucky" that her 11-year-old son Jared and 6-year-old daughter Samantha "understand what running is all about and how demanding it is."

"They know that I need to rest after training and they make it easy for me," Keitany told CNN. "My family are so helpful and I wouldn't have been able to come back if I didn't have them."

Another mom who is totally killing it as a world-class athlete is Allyson Felix, who previously beat Usain Bolt's record for most gold medals at a world championship, according to USA Today. Her big moment came in September, when she won gold medal number 12 as part of a mixed-gender relay team. It also came less than a year after Felix had an emergency C-section in November 2018 with her daughter, Camryn, who ended up spending 29 days in the NICU.

"So special, to have my daughter here watching means the world to me,” Felix told NBC Sports after breaking Bolt's record. “It’s been a crazy year for me.”

As a mom of four who is also a runner, I am in awe of these women. Sure, I train for and run marathons. But I'm nowhere near the elite level of Keitany, Felix, or Jeposegei. Still, the moral of these stories, to me, is this: Motherhood doesn't have to limit what women can do — it can actually make us stronger and capable of doing more. These amazing moms are living proof.