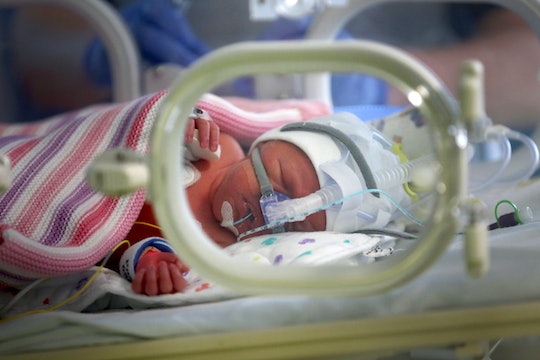 Dealing with the stress and uncertainty of having a newborn in the intensive care unit, or the heartbreak of losing a son or daughter so soon after his or her birth, can be an incredibly isolating and traumatic experience for parents. So, three mothers who know exactly what that's like — and how much of a positive difference having a solid, understanding support system can make — have founded the nonprofit Project Sweet Peas to make sure parents of babies who are struggling or who have died never feel alone. Some of the moms giving support to parents who lost newborns have been through that tragedy themselves, as People magazine reported, and it's morphing into an essential national movement.

The journey started between 2006 and 2007, when Corin Nava and Kate Crawford lost their babies to complications from a birth defect of the diaphragm that can cause difficulty breathing, following NICU stays. The two, along with Stephanie Olivarez, whose 10-year-old daughter was also born with the defect and spent time in the NICU, soon connected in an online support group. Out of that friendship, Project Sweet Peas was born in 2009 — and it now provides vital services to "support the cultural, spiritual, emotional, and financial needs of families as they endure life in the NICU."

"It’s the little gestures, but the main thing is that we want to let parents know they’re not alone in this process," Olivarez told People's Rose Minutaglio. "We understand them and their grief and we try to give them hope for the future and for their babies."

But "little gestures" hardly describes the monumental work this nonprofit with 18 divisions and more than 50 volunteers nationwide does for families in the throes of intensely confusing and emotionally turbulent periods. For small donations, the group supplies bereaved parents with "memory boxes" that include items like stuffed animals, flower seeds, and remembrance charms; They also host annual luminary vigils to remember the infants who have died each year.

And, importantly, the three cofounders and the volunteers that sustain the divisions from California to Texas to Pennsylvania are simply present for the parents who most need their help. Kristy Nimblett lost her preemie son after he spent five months in the NICU in 2013, and told People that Project Sweet Peas became her lifeline as she worked through the painful experience:

I didn't see a future after losing Jarred, but Project Sweet Peas helped me through that. I would get a letter or email to let me know I'm not alone. 'We're thinking of you.' It's incredible how much of a support system it is ... It was the phone calls once a week to see how I was doing and how Jarred was doing. The volunteers called to just let me vent, they were a shoulder to cry on and an ear to listen. They really became like another family.

The project's efforts are reflective of others seeking to help parents confront the realities of the NICU in a way that allows them space to process their raw emotions as well as celebrate milestones, even from what can be a grim place. In December, March of Dimes teamed up with a Missouri Hospital to dress up the tiny NICU patients there as holiday gifts, just to bring some joy and normalcy to the tense medical setting. "So providing these special families with an opportunity to celebrate the holidays in a memorable way allows them a sense of normalcy, and an opportunity to celebrate their babies' first milestones — even in the hospital — which is what every family wants to do," hospital spokesperson Michelle Manuel wrote in a statement to Scary Mommy at the time.

It's a big deal for parents, who often suffer from symptoms of PTSD even years after their children are released for the NICU. With that in mind, those who want to get involved or otherwise help the cause can donate money to the organization, volunteer from home or on the board of directors, or even host their own local fundraiser.

As those who have been involved with Project Sweet Peas in any way know, just not having to suffer alone can be a huge relief for parents. And no matter what happens during or after that stint in the NICU, moms and dads have gained a community for life.