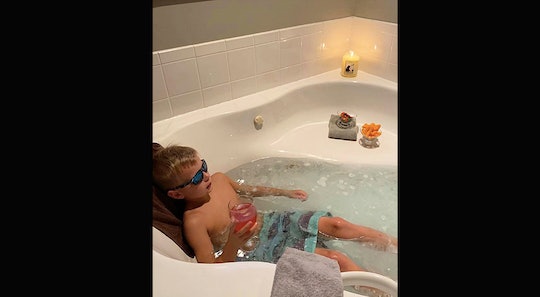 By now, most schools across the United States have been back in session for several weeks. Which means just enough time has passed for students to experience mental, physical, and/or emotional fatigue, whether it be related to classroom behavior, too much homework, and even bullying. Coping with all of the expectations and social pressures can be especially difficult for young students, which is just one reason why this mom's hack for her son's back-to-school stress has gone viral.

On Aug. 30, mom of four Laurie Koch took to her Facebook page, Justifying Jane (she runs a blog of the same name), to share how she handled her son's rough start to the school year. Fast-forward two weeks later, and her post has attracted more than 102,000 shares. And it isn't hard to see why.

See, Koch's 8-year-old son, Kade "unwittingly made some comments about himself that caused some of his classmates to tease and pick on him," she told TODAY Parents. When she noticed Kade didn't want to go to school in the mornings and was shutting himself in his room at the end of the day, Koch knew he was having a rough time.

"For the past 3 days I’ve sat outside the school at 3:00 biting my nails and straining to see him walk out the door. I wanna see what his face looks like, so I can gauge what the day has done to him," she wrote on Facebook, adding ended up rapid-fire questioning her son about how his day went, how he was feeling, and if kids were being nice to him. ”And at some point yesterday in the middle of bombarding him, I saw this look on his face that said, 'I need you to stop.' And so, I did."

What Koch ended up realizing was that sometimes, kids need the same things adults do: space, silence, "and their favorite snacks laid out next to a warm bath." So that's exactly what she did for Kade. Koch told Today Parents:

I cleaned up my bathroom, lit candles and ran the bath with my special bath salts. I used my fancy glass dishes to put jelly beans and cheese puffs into and filled a wine glass with some Kool-Aid. The look on his face when he came in the bathroom was priceless — he just kept saying, 'This is for me?'

Koch explained her son was calm for the rest of the night after his relaxing, candlelit bath with his favorite snacks. She accurately concluded, "I think sometimes these are the things that speak love to our children louder than our voices." (Amen!)

You know, I've had a similar epiphany with my two school-aged children (although admittedly, not nearly as hack-worthy or inspiring). Up until recently, I was asking my kids to do their homework as soon as they got home from school, just to get it out of the way so we wouldn't have to worry about it later. I found myself nagging and nagging and my kids complaining and dragging their feet the entire time.

What I came to realize was this: They needed time to decompress after spending seven hours at school, just like I do after working. I now allow them to just chill out or have some tablet time right after school — and then they can do their homework after we eat dinner. And you know what? They still get everything done each night, and it's infinitely less stressful on us all.

This mom's bath hack, though — it's something I'm definitely tucking away in my parenting arsenal for future reference. Because the stress kids are feeling these days at school is ridiculous, right? Thanks, mama, for sharing your story!