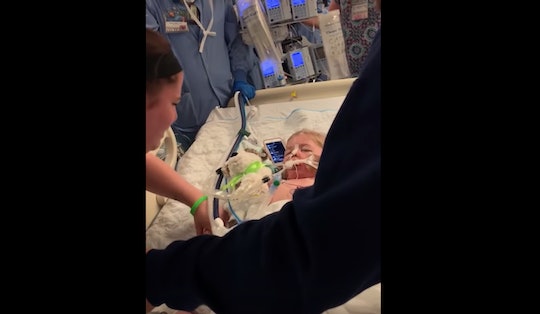 Mom Has Last, Heartbreaking Goodbye With Baby Before Organ Donation

In my opinion, one of the most difficult decisions a parent can make is to take their child off life support. Their still-breathing child is still warm, probably looks like they're sleeping, and still has a heartbeat — except that child has been declared brain dead. Letting go, even when parents know it's the right decision, must be so heart-wrenchingly unbearable. For many parents in this impossible situation, the option of organ donation is something that might bring a tiny bit of comfort during their darkest days. With that said, this mom's last moments with her daughter before the 1-year-old donated her organs will wreck you.

As the Daily Mail reported, a bereaved couple from Iowa — Meagan and Paul Sobolik — recently said goodbye to their 22-month-old daughter Coralynn "Cora." Their little girl was declared brain dead as a result of complications from parainfluenza. The Soboliks decided to give the gift of life through their daughter's organs. Cora's life support was turned off on April 22, and her heart, liver, and kidneys went to help three people.

The brave mom decided to share a video of Cora's "hero walk" and the parents' last goodbyes before the toddler's organs were surgically removed for donation. If you think your parent's heart can handle it, grab a box of tissues and watch the touching — yet heart-wrenching — tribute, below.

In the emotional clip — which lasts just under 7 minutes — medical staff at Mayo Clinic Hospital in Rochester line a hallway as the Cora is wheeled toward the surgical unit. It was Easter Sunday. They sing "Amazing Grace" before stopping near an elevator and allowing Meagan and Paul to say their final goodbyes. If you listen closely, you can hear Meagan say to her daughter, "'You get to save three people. I love you forever," before kissing her baby girl, according to the Daily Mail.

“The staff at Mayo was more than any family could ask for,” Meagan told People. “I was speechless, and it was truly wonderful to see and feel so much love and support for our little girl.”

According to the family's GoFundMe campaign, Cora was brought to a local hospital on April 19, where she was having signs of breathing distress. Doctors decided to have the toddler transferred to Mayo Clinic Hospital. As Cora was being sedated and intubated, however, her heart stopped — resulting in medical staff performing CPR for almost 25 minutes. Once she was stabilized, Cora was able to be transferred. Tragically, though, CAT scans showed brain damage — and eventually showed that Cora was brain dead after her brain starting swelling in the middle of the night.

My heart is so heavy for this family as they continue to grieve the loss of their sweet Cora. I can't begin to imagine their pain. However, I'm in awe of Meagan and Paul Sobolik (and the rest of their family — for deciding to give the gift of life despite losing their daughter. For having the courage to share Cora's inspirational hero walk. And for continuing to raise awareness about the power of organ donation in honor of their baby girl's life.