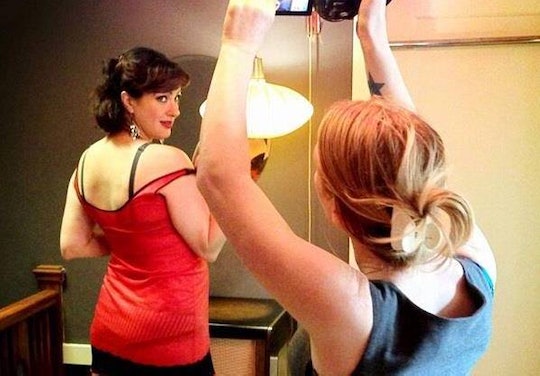 Becoming a mother was the most taboo thing that I had ever done. My body changed. My sex life changed and my experience in, and relationship to, my work changed. It was incredibly important for me to continue working throughout my pregnancy as I wanted to show the world that women are beautiful in all stages of their lives and that we are still sexual beings with sexual desires when we are pregnant. But during pregnancy and into the postpartum period, there were specific needs that came up for me as a performer.

As a pregnant performer, many production companies didn’t want to shoot with me unless we were specifically shooting a pregnancy fetish film. But there is a difference between celebrating a body and fetishizing it as “other.” Just as we should expect diversity in television shows, producers of adult films should make it clear on their web sites or in casting calls that they appreciate diversity in bodies, including pregnant and postpartum bodies.

My approach as a director was to present the pregnancy as simply another aspect of the woman’s physical being, while also trying — in subtle ways — to celebrate the beautiful and sexy changes that occur in her body during pregnancy.

Barber says, “Of the producers I know, Ariel is by far the most supportive of mothers, probably because she is one. She also goes out of her way to help other moms get access to passive income platforms, as she's familiar with the extra restrictions on our time.”

When you are pregnant, your body is changing rapidly, and how you feel, what feels good, what feels sexy, what you desire, and what feels comfortable can also change rapidly. Holding check-ins before casting, before writing the script, before shooting and during shooting is great for creating a supportive, sexy atmosphere.. If we shift the dynamic to the performer, we can create space for honest communication and negotiation to happen between the performer and the director.

The best way to learn about performers’ sexual desires and interests during pregnancy is to ask them.

Jennifer Lyon-Bell, a feminist porn director in Amsterdam, recalls constant changes during her own pregnancy. “When I was pregnant and a new mom, I remember that my body changed on a daily basis and so did my physical sensations,” she tells me. “So, one thing I might plan for with pregnant and new mother performers is that they would need the freedom to completely re-design the physical parts of the shoot, up to and including the day of the shoot. I’d plan ahead to ask about it regularly: ‘Does this still feel like it will be comfortable and enjoyable for you?’”

I like to say that each person is an individual — a unique sexual snowflake — and that goes for women while they are pregnant or in the postpartum period. And the best way to learn about performers’ sexual desires and interests during pregnancy is to ask them.

Lust tells me that comfort should be as important to safety during work, for pregnant and non-pregnant performers alike. “I would put special emphasis and special consideration in [a pregnant performer’s] comfort, having my talent manager check on what she needs on set all the time. Boundaries and limits are already established by performers on my sets and they talk about everything related to the sexual activity they are going to have.” The same goes for the safe sex methods they wanna use, she says.

Pregnant or new-mom performers might have either much less — or much more — energy than they expected. I would ask the cast and crew to be sensitive to this.

Nica Noelle told me that she would like to see industry-wide protocols put in place to insure that expectant performers are treated with care and professionalism on set, and that proper accommodations are made for health, safety and comfort.

Sadie Lune offers that having some “some flexibility around positions and sex acts for pregnant performers to work around changing levels of body comfort, while not assuming that pregnant people are fragile” is a key component to supporting mothers in the adult film industry.

Similarly, directors should be aware that energy levels can fluctuate for pregnant performers.

Jennifer Lyon-Bell tells me, “Pregnant or new-mom performers might have either much less — or much more — energy than they expected. I would ask the cast and crew to be sensitive to this, and I’d be happy to change the shooting plan to accommodate a mom’s needs.”

Consider The Challenge Of Childcare

As a performer, I often have to build in what it will cost me for child care as a base rate before adding on my performer costs. Either assisting with offering qualified child-care providers for the duration of the filming or compensating the performer additionally to cover child care costs would be probably one of the most supportive ways that a producer/director could support mothers with in the adult film industry.

Jennifer Lyon-Bell relates with her own child care challenges, “Another thing that I know as a mother myself is that arranging childcare requires a lot of emotional energy and is often a financial burden as well. I would also try to help educate the cast and crew that a situation with children is not easily changed. My impression is that throughout the independent film world it’s assumed that cast and crew will be 'flexible,' but kids really limit that flexibility”

Sadie Lune had trouble finding childcare on the day of a shoot, telling her director that the full day would be difficult. The director called in a favor, hiring an experienced babysitter to be on-set. “They spent the day at a nearby playground and it felt like an incredibly positive work experience where my role as a parent was supported and not framed as a liability,” she says.

Support Pumping And Breastfeeding At Work

I remember one of my first shoots after giving birth to my first child. My stretch marks were still visible and of course with my foggy sleep-deprived new mama brain, I had forgotten my breast pump. The director would ask me to masturbate and I would eject breast milk from my nipples. I was a leaky mess and the director had to keep handing me a towel to dry off my spilt milk. I ended up having an assistant drop by my house to pick up the pump because my breasts became so painful. It is good to allot a break every two hours for pumping, although the best thing is to check in with the performer to see what their pumping needs may be and support those.

Mother’s rooms aren’t a given in workplaces yet (employers are not required to create a permanent space for lactation), but would be a huge help. Bell says, “I’d want to make a plan for creating private, comfortable spaces where moms can either breastfeed or pump near the set. And if it was possible to plan the timing of the shoot around the timing of feeding/pumping needs, I'd be more than happy to do that."

Lune reiterates the importance of breastfeeding and pumping breaks, “As far as support for new parents within the industry goes, I think a lot of the measures are the same as in any industry, like a private relaxed space that is not a toilet in which to pump breast milk. I was on a multi-day shoot and the producer let me use his office and personal fridge to pump and store my breast milk in private.”

Lune suggests accommodating for breast pumping of feeding breaks every two to four hours, but checking in with the performer regarding her specific needs.

As independent contractors, the best ‘’ maternity leave” option for expectant performers is creating passive income by hustling twice as hard during pregnancy.

Performers have almost no rights or benefits, and are often forced to beg for help from fans should they become ill or otherwise unable to work.

Noelle points out that “If a woman makes her living in the adult industry — and makes money for studios who profits from her work — she should be able to expect a basic level of support during one of the most natural stages of her life.”

But by and large we are on our own, as things stand. Noelle recognizes this with disappointment. “Performers have almost no rights or benefits, and are often forced to beg for help from fans should they become ill or otherwise unable to work,” she says. “We’re lucky that our fans are so generous, because the industry itself does almost nothing to help or protect its performers, and I don’t expect that to change any time soon.”

Barber says working for herself, owning her own content, and using platforms like Clips4Sale enabled her to work through her pregnancies. If performers have a site of their own, create and own content for clip sites, or create media for a Patreon platform, they can set up updates to automatically post while on maternity leave.

Passive income from clips and video-on-demand) sites such as PinkLabel.TV and LustCinema.com can become a steady way to develop monthly income that generates a paycheck even when you’re not actively working.

Noelle says of the experience, “That felt important, because when women and mothers can advocate for each other successfully in this industry, it’s obviously a victory for us all.”

More Like This
How To Support A NICU Parent, From Moms Who’ve Been There
Home Reno Culture Makes Me Feel Like I Live In A "Before" House
I’m Getting Dual Citizenship For My Jewish Children, Just In Case.
I Finally Tried Toy Rotation — & OMG, It Actually Works