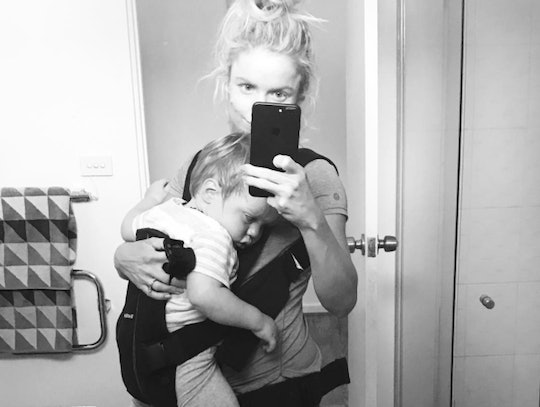 While Equal Pay Day might have been a mere few weeks ago, women are nevertheless constantly shamed for the choices they make regarding work, parenting, and just about everything in between. Both stay-at-home moms and working moms are still judged on a daily basis for the way they choose to live. Thankfully, one mom is done putting up with it. Last week, an Australian mother of two (and soon to be three) posted a photo on her Instagram page with an honest caption about what it's like being a stay-at-home mom. The post has been liked over 5,000 times and for good reason: The young mom's list of stay-at-home duties proves their jobs are much more exhausting than you might think.

Anna Strode is pretty popular on Instagram, with over 80,000 followers and hundreds of posts showing adorable videos of her kids playing while she does some pretty intense workouts. She is the mom of two twin boys, who are almost 2 years old, and is expecting a new little bundle of joy this June, according to The Huffington Post. But being a mom hasn't stopped Strode from working hard, as her posts indicate. Unfortunately, though, despite her popularity, Strode isn't immune to naysayers and trolls on the internet, and last week one comment bugged her so much that she just knew she had to take a stand.

The comment, which according to Strode shamed her for being a stay-at-home mom, really stuck with her. "It cut me pretty deep and while I do my best to remain positive - this hurt," she said in the caption. And while it has actually been proven that mom's today are more shamed than their own mothers were, it doesn't make it any less frustrating, or hard to deal with.

Strode made certain to inform anyone who thinks stay-at-home moms don't do their fair share of "work" that they're seriously mistaken, writing in the caption of the now-viral post:

Work?! You think I don't WORK?! You think I sit at home all day and twiddle my thumbs? You think 2 x 22 month old toddlers just let me kick my feet up all day after I've done my morning workout? You think I'm beaming with energy as I grow a new baby and frantically do my best to keep up with twin boys that run rings around me?!

Just to break it down... I exercise for 20-30 minutes a day. Sometimes stopping 20 times throughout to fetch toys, bring food, stop hair pulling, break up fights over toys and some days, stopping 2 minutes in because it just ain't happening that day! Other days we're so busy or the boys are so CLINGY / CRANKY (eg: this photo sums it up) the best workout I can get in is some squats, push ups and tricep dips while they eat or while we practice new words, counting to 10 or all the body parts we've learnt.

I certainly DON'T spend all day exercising. My days are spent changing shitty nappies, dealing with tantrums, playing cars and trucks, making food that gets thrown on the floor before it's even tasted, walking the streets trying to get tired, grumpy children to nap, attempting to teach two little humans to SHARE instead of bite, pull hair, scratch or push each other, pushing swings, climbing up and down bloody forts that shouldn't even be in kids playgrounds because they are so damn unsafe, singing the alphabet, going for adventures to keep the bubs happy, vacuuming 3 times a day because of all that food that I worked so hard to cook wasn't even considered eating, oh and did I mention the constant battle of playing referee ALL day between two little cheeky monkeys that guess what DON'T "just play happily and entertain each other all day!"

"For the record, TWINS don't do that!!!" she concluded the post. "Maybe when they're older, yes! I hope so anyway - but for now, no - I literally for most of the part can't take my eyes off them!"

Clearly, Strode isn't taking any crap from anyone who says she doesn't work hard. And by the looks of her Instagram, she definitely has a lot on her hands. Strode is right that stay-at-home moms have to deal with just as much stress, frustration, and hard work as everyone else. Just parenting looks different depending on the household doesn't mean one is better than the other — and Strode is proof of that.