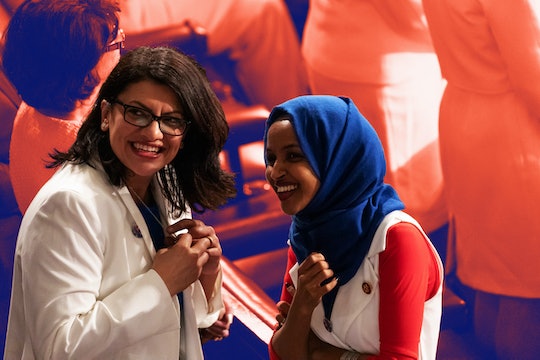 "Many of us didn’t run to be first of anything," Tlaib tells Romper. "I wanted to go after the corporate assault on working families and push back against corporate greed, and push the curtains open so people could actually see who’s behind this: the same people who go after all of us, no matter our color. Really, the same people trying to push forward oppression on all of us."

Chipping away at oppression is central to the mission of Mothering Justice, an organization dedicated to empowering mothers to push legislators to enact policies that benefit working families. The organization held their inaugural Mama's March policy roundtable, in conjunction with the National Women's Law Center and the Center for American Progress, on Tuesday in Washington, D.C. The discussion, attended by representatives Brenda Lawrence (D-MI), Deb Haaland (D-NM), Senator Kamala Harris (D-CA), and Rep. Tlaib, centered issues that impact mothers of color — things like maternal justice, affordable child care, and earned paid sick time and paid leave. Call them the special interests that the citizens of America actually *want* their leaders to discuss.

Before we got [to Congress] the majority of our colleagues, over 250 of them, were millionaires.

The mother of two children and the oldest of 14, Tlaib sponsored a proposal for paid sick time in Michigan that would have given employees one hour of paid sick time for every 30 hours worked, up to 72 hours a year. Republicans amended a version of the law, however, and cut the time to 40 hours per year, allowing employers to limit an employee's time to one hour a week and offer all 40 hours at the beginning of a calendar year to avoid carry-over.

"Before we got [to Congress] the majority of our colleagues, over 250 of them, were millionaires. I don’t know what the amount is now, but I’m sure it’s still up in the 200s," Tlaib said during the roundtable. "This is an income bracket that’s completely disconnected with the majority of American people. So we’re here fighting for paid sick leave, and they don’t get it."

The 116th Congress gets it, though.

The stories of their diverse constituents often mirror their own experiences growing up as women of color in a country historically led by rich white men. And Tlaib and her sisters in Congress are changing the discourse in D.C. and introducing policies that better reflect the needs of everyday Americans.

I wanted to go after the corporate assault on working families and push back against corporate greed.

On Wednesday, the House Ways and Means committee held its first full hearing devoted exclusively to developing a paid family leave act, which would finally mandate paid time off for new families. And in the 116th Congress' first session, HR 1897 was introduced, a bill that would "improve federal efforts with respect to the prevention of maternal mortality."

The benefits of having the most diverse group of representatives elected to Congress — a group that includes 106 women — are already revealing themselves in ways both big and small.

"I really am blessed that I’m the eldest of 14," Rep Tlaib tells Romper. "I've been taking care of people my whole life. And even as a lawyer, as a community organizer, and as a state representative, if I don't have those stories then I stop doing what I do."

Those stories include a mom losing her 6-year-old because she couldn't afford her insulin, and a devastating account of an immigrant mom in Flint, Michigan. "I took my 9-year-old son to go pass out water, because we wanted to do something in Fint with the crisis," she recalls. "My friend shared this powerful story that our immigrant community, especially immigrant mothers, were being left out. They weren’t being engaged. So they took people who were Spanish speakers out door to door, and they found this woman who is from Guatemala." It was discovered, via an interpreter, that the woman didn't understand that the water was still dirty, even after boiling it. She had to be told that the water wasn't dirty because of bacteria, but because of lead, and that boiling the water, like she said they do in Guatemala, would actually make things worse.

"She begins to cry because she has an infant and she said, 'But I’ve been nursing my child,'" recalls Tlaib. "And it still brings me to tears and shock that this woman had never been engaged." And she is indeed blinking back tears, though she also seems angry.

"It’s really important, as we try to look at these policy areas and trying to talk about really economic justice issues around paid sick leave and so forth, that we also uplift these stories."

Tlaib says people need to understand what "us doing nothing" looks like. "And to me," she said, "this is what it looks like."

She's talking about the current state of maternal health.

The United States has the worst maternal mortality rate of any developed country. Today, a woman is 50 percent more likely to die as a result of pregnancy or childbirth than her own mother was, according to Dr. Neel Shah, a Harvard Medical School obstetrician. And in a recently released report from the Centers for Disease Control and Prevention (CDC), three out of every five pregnancy-related deaths could have been prevented. And it's women of color who are the most at risk.

Which is why Rep. Tlaib is hellbent on carrying the heartbreaking stories of those often left out of the national conversation concerning maternal mortality and health care into the halls of Congress. "I don’t want that sense of urgency to go away, because I think I would become less effective," she says. "It’s important that I don’t forget; that I don’t forget the human contact that I’ve had with people. I come here with that. If I don’t have it then I think my soul would be missing."

At at time when the nation is facing what is being described as a "constitutional crisis," and presidential candidates are lamenting on the current "battle for America's soul," Rep. Tlaib knows where her soul lies: at home, with the people who are often overlooked and left out of vital conversations and policies.

"If I'm not hands-on, if I'm not at the service center, if people aren’t calling me directly, if I’m not there, I think a piece of my soul will be gone along with why I ran in the first place," Tlaib said. "But I like sharing those stories with my sisters up here and reminding them this is why we’re here. We’re here to be seen and heard."