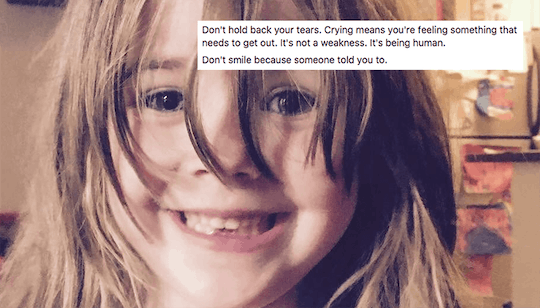 "Don't apologize when someone else bumps into you." It seems like such common sense advice, and yet, we do it every day. This advice comes from one mom's letter telling her daughter to stop apologizing, and it is an empowering, refreshing read. Blogger Toni Hammer posted the letter to her 5-year-old daughter Lillian on Facebook and Instagram, where it has gone viral for its candor. As a habitual apologizer, I can completely relate to Hammer's letter to her daughter, and it's a message that all girls should hear from an early age.

Hammer is a mother of two with a daughter, Lillian, and 4-year-old son, Levi. What's particularly powerful about Hammer's letter to her daughter is that she never wanted to have kids in the first place. "While it’s true I never wanted kids, and I have no shame in admitting that, I love them so much," Hammer writes at her blog, Is It Bedtime Yet. "Just because I never wanted this adventure doesn’t mean I’m not loving the journey."

Hammer was inspired to write the letter to her daughter as she started kindergarten this year, which caused Hammer anxiety when memories and emotions resurfaced about Hammer's own negative experiences in school growing up. "I was picked on a lot as a kid and I hate the idea of her going through what I did. I know it won’t be long before someone tries to make her feel ‘less than’ and I want her to face it with more confidence then I had at that age," she told HuffPost.

Hammer's letter is filled with positive messages for her young daughter, such as validating her worth as a human being: "Don't say 'sorry to be such a pain.' You're not a pain," Hammer wrote. "You're a person with thoughts and feelings who deserves respect." While it might seem like a mature message for a 5-year-old, it's important for kids to hear messages of positive self-worth from an early age.

According to The Conversation, children begin to develop a sense of self as early as toddlerhood and parents can reinforce the concept of positive self-worth from as early as birth. That said, don't stress if you feel like you've missed the boat on cultivating your kid's self-worth: Hammer's letter is a great primer for the messages you can impart on your children right now.

British parenting author Tanith Carey pointed out to The Irish Examiner that teaching young girls self-worth isn't about cultivating an inflated sense of ego for young girls. "Self-worth is self-acceptance — feeling good about yourself most of the time," Carey said. "It’s ability to understand your feelings and [know] what makes you feel good and bad.” Hammer's daughter is the at the age when children can find it hard to cope with "big feelings."

According to a report from Too Small to Fail, a joint initiative between the Clinton Foundation and The Opportunity Institute, "Social-emotional development plays several key roles in early childhood, from understanding feelings, to taking turns, to building healthy relationships with others. It is the foundation upon which much other learning takes place." Hammer's letter is a brilliant example of encouraging social-emotional development while encouraging her young daughter's own independence. According to her letter:

Don't keep your hair long to make someone else happy.

Don't wear a dress if you don't want to.

Don't stay home because you don't have anyone to go out with. Take yourself out. Have experiences by yourself and for yourself.

Don't hold back your tears. Crying means you're feeling something that needs to get out. It's not a weakness. It's being human.

Don't smile because someone told you to.

Don't be afraid to laugh at your own jokes.

Don't hide your opinions. Speak up and speak loudly. You should be heard.