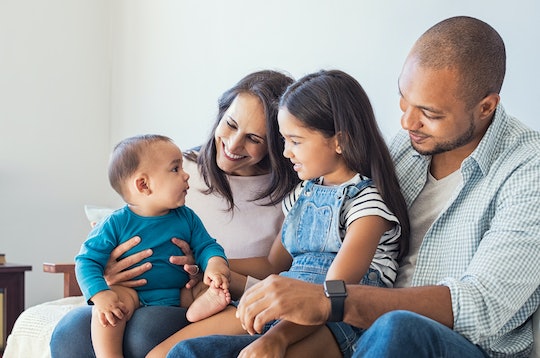 There are endless comics, GIFs, and punchlines comparing raising your first child to those that follow, but there may be more than just laughs to inspire the comparison. A recent study found that moms' "parenting attitude" changes after their first baby, meaning that subsequent children tend to be raised a bit differently than their older siblings. What's more, along with receiving different treatment from moms, the children in the study also behaved differently themselves.

Researchers involved with the study, which was published in the journal Social Development, looked at 55 mothers who each had two children. According to Science Daily, the team, led by Marc H. Bornstein, observed the moms interacting with their first child at 20 months of age, and then again interacting with their second child at the same age. Their findings suggested that mothers behaved differently with their two children as far as rank order — the example of this behavior given by Science Daily is that moms who played a lot with their firstborn did not do so with their second child.

Along with moms behaving differently, the behavior of the children also varied. Overall, firstborn children tended to be more sociable with and emotionally available to their mothers than their siblings, according to Social Development. Because of this change in behavior, the study suggested that while parents' beliefs remained consistent over time, their behavior towards their two children at the same age changes in response to differing child behaviors.

As any mother to multiple children can tell you, a lot changes between baby number one and those that follow. You likely had a lot more energy the first time around, as well as more opportunities to nap during that painful first trimester. But what you may not realize is how different your children can be from one another because of the order in which they were born.

Bornstein's study isn't the first to suggest that birth order can impact children's personalities. Dr. Kevin Leman, a psychologist whose research has been focused on birth order since 1967 and author of The Birth Order Book: Why You Are the Way You Are told Parents, "The one thing you can bet your paycheck on is the firstborn and second-born in any given family are going to be different." But how so? Along with being more sociable with mom as this study suggested, firstborn children also tend to be more reliable, conscientious, structured, cautious, controlling, and high achieving, according to Parents. But it isn't all about birth order; parental behavior also influences personality and ability.

Firstborn children also tend to be more intelligent than their siblings, according to The Independent, because they receive more mental stimulation from parents in the early stages of their lives. A study conducted by the University of Edinburgh found that parents gave firstborn children more support with tasks that involve thinking, leading them to perform better on reading and picture vocabulary tests. While parents maintained the same level of emotional support, the study, which was published in the Journal of Human Resources, found that they spent less time on "brain-stimulating activities with their younger children, took part in fewer activities with them such as reading, crafts and music."

It is unlikely that any parent sets out with an intention of depriving their younger children of the mental stimulation that they offered their firstborns, and the intention here is not to shame them for doing so. Rather, research such as this helps parents to understand how factors like birth order and parental involvement shape the little humans that we are bringing up. Knowledge is power, after all.