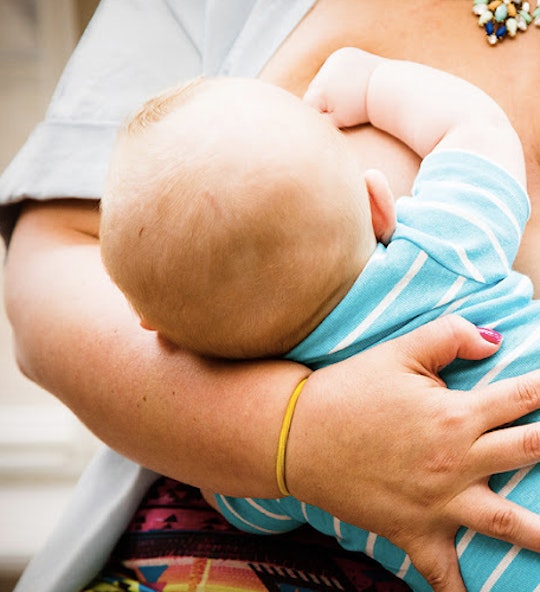 The highlight of Natasha Fogarty's day was breastfeeding her son, Milo. But their daily ritual was suddenly cut short when the 29-year-old mom was diagnosed with breast cancer. Fogarty found out she would need a mastectomy. She knew that meant she'd have to wean her newborn early, so she decided to capture the moment forever. The mom's photos of her last breastfeeding session before cancer treatment are beautiful.

When she first felt a lump in her right breast, Fogarty told Babble.com that she wrote it off as another way in which pregnancy was changing her body. But when the lump didn't go away months after the baby's birth, it was time for an ultrasound. On June 10, her doctor called her with terrible news: Fogarty had breast cancer. The doctors told her they would have to act fast. She would need a mastectomy within weeks, followed by chemotherapy. Fogarty knew that meant the end of the breastfeeding sessions she so cherished.

"For minutes out of the day, he was mine," she told Babble.com. "If friends or family were holding him, I could say 'Oh, sorry, it is time to feed him.' Mostly, it was our bonding time. The whole world stopped and we got to just enjoy each other. It was a love connection."

Fogarty, who had planned on breastfeeding for at least a year, was devastated. She wanted to remember the feeling of being able to comfort and feed Milo forever. But before she had the operation, she decided she would record their last session.

"I had two weeks of breastfeeding my son after knowing I would have the surgery, so we cherished and relished every second of those moments we had together."

The Saint Louis resident issued a plea on Facebook for a photographer to take some shots of her last time breastfeeding Milo. Immediately, Kari Dallas of Vintage Lens Photography offered to do the session for free.

The results were breathtaking. The connection between Milo and Fogarty while she breastfeeds is visible. Not only are the photos are gorgeous, but they also capture the intimate, if fleeting, bond between a breastfeeding mother and her child.

Fogarty's surgery went well. She is healing and will soon start 24 weeks of chemotherapy treatment. She decided to share the photos as a way to support other breastfeeding moms who may be going through similar trials. As for Milo, three of Fogarty's close friends made sure he got the breast milk that he needed.

"Milo won't take formula, so my really close friends donated their breastmilk to me," she said. "It's really amazing, the love and support they gave me. I couldn't do it without my friends and family."