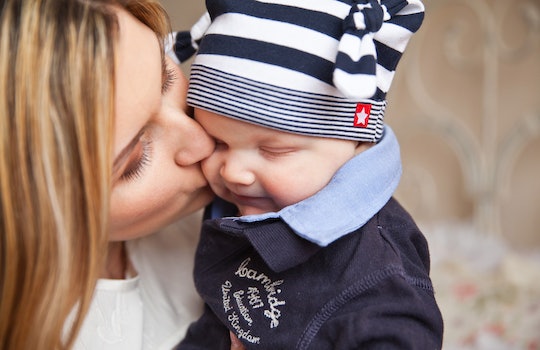 You Need To Read This Post About New Motherhood

Many new moms feel as though they've been initiated into some sort of secret society in which the real struggles of motherhood are carefully guarded by cloak and dagger. But why the secrecy? This is the precise question behind a Cornwall, England-based mom's Facebook post about new motherhood, which details the many struggles of parenting an infant while encouraging moms to speak more openly about their experiences.

Gylisa Jayne, 24, got right to the point in her post, which has since gone viral: "The things no one told me," it begins. The things that nobody told Jayne about motherhood include: vaginal stitches; hating her husband; attempting to shave and shower while looking after a baby; not bonding with her baby right away; and, of course, the perpetual urge to tell people to "eff off," as Jayne puts it, when they have parenting advice to offer. Each of Jayne's bullet list points begins with "no one told me," thus highlighting the problem of new moms entering motherhood having not been told by family, friends, or other sources about these less savory aspects of parenting.

But when a mom does share the real deal, other new moms are relieved for the camaraderie. It's little surprise, then, that Jayne's Facebook post has been shared nearly 70,000 times.

Jayne, who has been blogging about parenthood since her 17-month-old daughter was born, told Us Weekly, "I think it is beyond important for women to be more open about how they felt after giving birth. It would put a stop to an endless cycle of women putting on a brave face and hiding that they are struggling.”

Not one to mince words, Jayne wrote about the experience of seeing her baby for the first time and not falling immediately in love. Or, as she put it, "No one told me that it's perfectly fine to admit you didn't 'love' your baby when it was fresh from the m-nge and being thrust at you." In her interview with Us Weekly, she expanded on this, saying that not bonding with her daughter right away was the "biggest shock" of new motherhood. "It took a week or two," she said. "But I didn't know that that was normal. Only a percentage of women do feel that rush of love that is so often talked about."

Jayne also wrote about breastfeeding (it "DOES F---ING HURT," she wrote, but only for a few weeks), the fact that many new moms feel "lonely and scared and weird and not like themselves anymore," and the painful reality of feeling as though she "couldn't tell anyone I felt like that." Her post focuses on the first year of parenting, so given that Jayne's daughter is now a toddler, she got through it all somehow, as we all do.

The post ends on a positive note. "Those feelings don't last forever," she wrote. "...You all said, each and every one [Jayne's readers], that it gets better. It gets easier. It will fly past. It will be worth it. And it's not forever."

For new moms everywhere who are still in the trenches of those first several months, these are comforting words indeed.