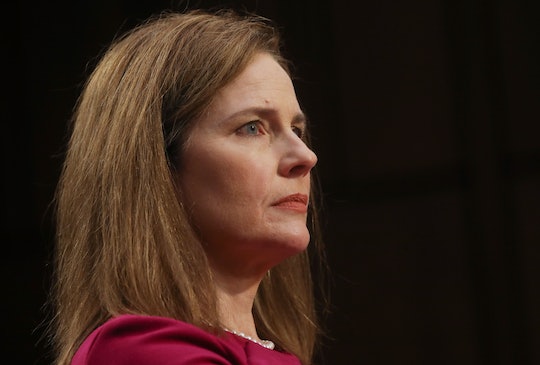 A number of social media users have collectively rolled their eyes at how amazed Republican male senators were by the fact that Amy Coney Barrett is a working mother of seven kids during Monday's Supreme Court confirmation hearing. More than one Republican man on the Senate Judiciary Committee noted, almost in amazement, that Barrett had seven children and praised her ability to balance career and family. But as many on Twitter have pointed out, most working mothers, especially those who are poor or low-income, aren't generally met with the same enthusiasm and praise that Republican senators reserved for Barrett on Monday.

A transcript of Monday's hearing put together by Rev showed Senate Judiciary Committee chair Lindsey Graham made note of Barrett's "seven children, two adopted" with husband Jesse M. Barrett in his opening statement. Later, Sen. Chuck Grassley described Barrett as "a tireless mother of seven" and noted he considered it to be "a privilege" to "welcome a justice like that to the Supreme Court" due to his interests in improving foster care and promoting adoption.

Sen. John Cornyn claimed his two adult daughters "marvel at the balance [Barrett] achieved between your personal and professional life."

"They want to know how you do it,” VICE quoted Cornyn as telling Barrett during the hearing.

But while Cornyn and many of his Republican colleagues seemed expressed admiration for Barrett, many on Twitter found their reactions hypocritical.

"Cornyn is amazed that Barrett has a job and raises kids," Melanie Schmitz of The American Independent tweeted. "I would like to introduce him to every other working mom in America, many of whom are vilified and whose lives are made harder every day by some of the very same people sitting in that room."

"Super tired of these dudes constantly lavishing praise on her for simply having several children," Schmitz continued in a follow-up tweet. "You know who else has several children? Women who have to go back to work w/o mandatory PAID maternity leave. Women seeking asylum here who've been called parasites and criminals."

Similarly, reporter Bryce Covert noted that while Republicans were quick to praise Barrett for having seven children, many of them supported policies that burdened low-income women for having larger families. "As Amy Coney Barrett gets lauded for being a mother of seven, I've been reporting a piece about welfare policies that explicitly punish poor women for having more children," Covert tweeted. "Just, you know, an interesting juxtaposition."

Others wondered why Republicans had opted to place such an emphasis on Barrett being a mother when it had little to do with the job she was being considered for. "I'm really tired of hearing about Amy Coney Barrett's family," writer Helaine Olen tweeted. "I'm sure she's a great mom! I'm sure she's better than me! (I can barely manage 2 kids, never mind 7). But she's not getting voted into a parenting position. Let's move on."

Ernest Owens echoed a similar message, in a tweet asking what was up with the GOP's "descriptions" of Barrett. "Amy Coney Barrett is trying to be appointed as a member of the SCOTUS... not soccer mom of the year," Owens tweeted. "GOP can't help their sexism as they try to appoint a woman of their own party."

The sexism behind the GOP framing Barrett's status as a mother as relevant to her judicial suitability also struck lawyer and author Jill Filipovic. Not everything a woman does is derived from her maternal status," Filipovic tweeted.

Barrett's fellow working mothers were largely unimpressed with the GOP's emphasis. "As a working mom, I am so bothered by the way GOP lawmakers keep bringing up Amy Coney Barrett's status as a mother," mom of three Elizabeth Picciuto tweeted. "Being a parent doesn't make her qualified to be on the Supreme Court."

But as Barrett's Supreme Court confirmation hearing continued on Monday with Republican Sen. Joni Ernst accusing Democrats of "attacking" the circuit judge "as a mom and a woman of faith," it became clear that the party was strategically holding Barrett up as a shining example of working motherhood nonetheless.