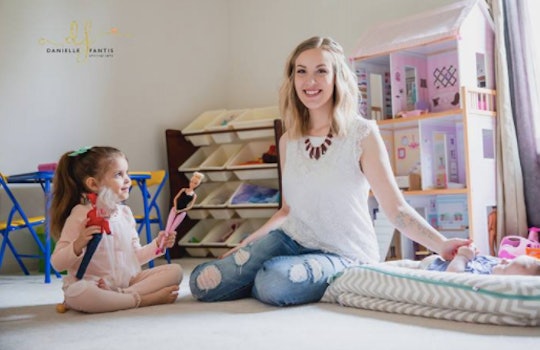 In her Facebook post, DiVincenzo included two photos of herself with her children for comparison. In one, she's in comfy clothes, her hair is put up, and she looks exhausted as she plays with her children, toys strewn all around them. In the other, she, her children, and the room they're playing in are all "Facebook worthy," as she put it.

"The truth is, both of these pictures represent my life depending on the day," she explained. She chose to share the photos because she wanted to invite others to share their stories, and encourage fellow new parents not to suffer alone. As DiVincenzo wrote:

The only thing more exhausting than having these conditions is pretending daily that I don't. I work twice as hard to hide this reality from you because I'm afraid to make you uncomfortable. I'm afraid you'll think I'm weak, crazy, a terrible mother, or the other million things my mind convinces me of and I know I'm not alone in those thoughts.

DiVincenzo didn't just post the photos along with an impassioned call for similar stories in the comments below them. She also included some important stats. For example, the American Psychological Association found that for one in seven mothers, the postpartum period isn't always "euphoric," as DiVincenzo described. The APA's website confirmed this statistic about postpartum depression and anxiety.

"We need to learn the signs, symptoms, risk factors, and support plans for postpartum conditions," DiVincenzo urged readers. The APA listed the following warning signs of PPD, among others:

The APA also noted that, if those warning signs or symptoms persist for longer than two weeks, a mom may need to seek professional help.

DiVincenzo stated in the post that her photographer friend, Fantis, also struggled with PPD, so it's especially apt that the two collaborated on the project together. The partnership and post challenged readers to "push past the discomfort society has placed on postpartum mental illness" — and delivered a little real talk about not always being "Facebook-ready" at the same time. Talking about postpartum mental illness is important, because so many women suffer silently, while thinking that they are just bad mothers.

DiVincenzo made sure other readers felt seen and included by sharing her photos, and she invited them to comment with their own stories below the post. She also snuck in a little encouragement for those fellow mamas as well: "In case no one has told you, you're doing an amazing job. You are loved and you are worthy. You're not alone."

For more information on PPD, check out the Mayo Clinic's information about postpartum depression on their website. To seek immediate help for your symptoms, contact the Postpartum Health Alliance or Postpartum Support International and their hotlines. If you are experiencing suicidal thoughts, call the National Suicide Prevention Hotline at 1-800-273-8255 or call 911.