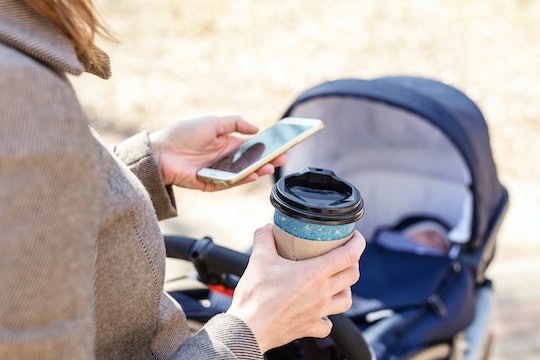 Mom-shaming can happen to anyone and no one is apparently safe from the opinions of others these days. And those opinions can hurt, especially when they come from strangers seemingly out of thin air. This is why this mom's response to a man who phone-shamed her should be required reading for everyone. It emphasizes the importance of what these kinds of comments can do to a mom who is just trying to do their best.

Shopping with kids can test the patience of any parent. Parents don't know if their kids are going to be on their best behavior, or have a breakdown in the middle of the grocery store, just because they can't push the shopping cart. And when strangers get involved, it can make things so much worse. Take it from this mom of two kids, Tracy Bennett, who took to parenting support page, Breastfeeding Mama Talk, to share her own experience with this exact issue, according to TODAY.

Bennett wrote in the post that she had been standing in the membership line at Costco for 15 minutes, while her two sons started getting fussy about wanting Costco pizza (who hasn't been there) while she was on the phone. This reportedly prompted one stranger to mom-shame her for her fussy boys. "You see these babies?," the stranger reportedly asked. "They fuss like that because they want your attention. Maybe you should get off the phone and give them your attention."

What the stranger failed to recognize? Bennett was going through it at that exact moment. She wrote in the Facebook post that he didn't see that she was on the phone with her husband to get more information about her Costco membership, and didn't notice that her little ones were smiling and laughing just minutes before her oldest started begging for pizza. The stranger didn't get to see everything she had tried to do to keep her babies entertained — he only saw the not-so-glamorous parts.

"But thank you for your parenting advice," Bennett wrote in the Facebook post. "Thank you for taking the time out of your day to shame a young mother with two tiny children. Thank you for seeing a stressful moment and thinking 'I think I'll make this worse for her.'"

She has a point. Moms have been publicly shamed for the most wild things — from going to work after having a baby to not having a clean house to packing raisins in their kids' lunch box (yes, really). While people have no problem making these comments, they fail to see the hurt these comments can cause. The mom shaming really needs to stop.

Bennett told TODAY that she was shocked when the stranger came up to her to complain. "I was so caught off guard and it took me a second to realize he was saying something ugly," she said.

Although this stranger might have felt the opposite, thousands of Facebook users have shown support for Bennett thanks to her now-viral post about being mom-shamed. "So much love for this mama and babies because I know the struggle and at the end of the day the struggle is real," one commenter wrote. "And as real as it gets, I wouldn't change it to please anyone or for no one else to put their two senses in when they know nothing about it, either."

Bennett told TODAY that she has been happy reading everyone's supportive comments. "Motherhood is hard and it takes a lot of people telling you that you're not ruining your children's lives and sharing their own hot messes for you to feel like you're doing OK. And, even outside motherhood, I don't understand why people want to tear each other down — what good comes from that?"

Bottom line? Behind every fussy baby, there is an even more exhausted parent. Assume they're trying their hardest and doing their best, OK?