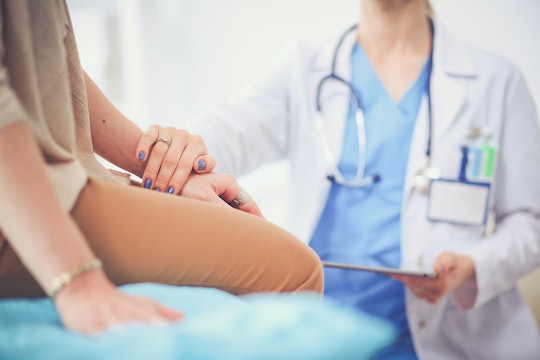 One of the most difficult things about dealing with postpartum depression is simply getting a doctor to diagnose you for it. But that also means getting screened for it on a regular basis, and some doctors still fail to do so, according to a new study. The study also suggests that moms should be screened for postpartum depression in the emergency room, where medical professionals have the benefit of seeing new moms who might otherwise fall through the health care system.

According to the American Academy of Pediatrics and the American College of Obstetricians and Gynecologists, doctors are supposed to screen mothers for postpartum depression when they bring their newborn in for wellness visits. But researchers at the Children's National Health System's partners found that doctors are either not following the recommendations and that some new moms aren't able to make all of their appointments due to a lack of health insurance, as their study, published in Pediatric Emergency Care showed. But moms do bring their babies into the emergency room, whether it's for a personal health concern or if there's something wrong with their baby.

Dr. Lenore Jarvis said in a Eureka Alert release accompanying the study, "The [emergency department] becomes the safety net for people who are not routinely accessing regular checkups for themselves and their children. If a mother is having an acute crisis in the middle of the night and feeling anxious and depressed, they often come to the emergency department for help." So she decided to start there.

Jarvis and her colleagues asked launched a pilot program in the children's emergency departments of the Children's National Health System for eight months and asked English and Spanish speaking moms of infants 6 months old or younger to participate. If their child didn't have immediate emergency care, they gave the mom a short questionnaire to fill out that included the Edinburgh Postnatal Depression Scale, which is a well-known tool for screening postpartum depression and some sociodemographic questions.

Researchers spoke to 209 moms and found that 27 percent of them scored positive for postpartum depression and 14 of the moms had had suicidal thoughts, as Eureka Alert reported. The most startling thing was that about half of the participants had never been screened during a baby care visit by their own doctor, according to the study. But the study didn't stop there; if the moms scored positive, they received an informational booklet about postpartum depression and were offered a consultation with a social worker (if they had a "strongly positive" score, they were required to see one and given more resources).

When Jarvis and her team followed up with participants months later, many said that the resources helped and that even being screened was a good wake-up call to pay attention to their mental health post-baby, according to the study.

Some of these women had no idea how common PPD was. They thought they were crazy and felt alone and were bad moms. For someone to even ask about PPD made these women aware that this exists, and it's something people care about. It goes to show that putting support systems in place for these new mothers is very important.

The researchers ultimately found that being cared for and checked on is crucial for new moms.

According to Austin 360, women see their children's doctor more than their own in the first year of their baby's life. Which means that they're in a health care setting most of the time, just not center stage. And depression is a tricky condition — you can't really diagnose yourself and might not even know that the emotions you're feeling are signs of something more serious. Jarvis' study is a good reminder that anytime a doctor is evaluating a child, they should be talking to the mother, too. Postpartum depression is serious business, but diagnosing, treating it, and getting mothers the support they need shouldn't have to be hard.