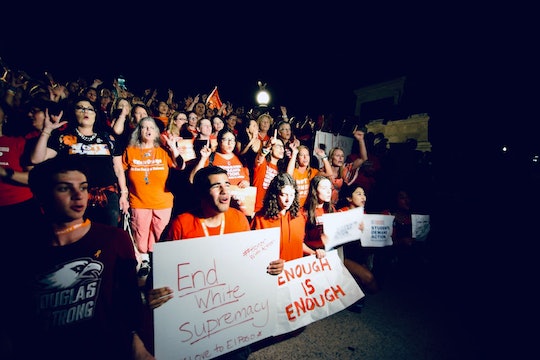 With two consecutive mass shootings in the United States taking place within 24 hours, many Americans are responding with more than thoughts and prayers. Case in point: After the El Paso, Texas shooting on Saturday, hundred of moms stormed the White House to demand common-sense gun laws and to implore lawmakers to do their "damn jobs." The moving scene proves parents are not willing to give up on this important fight just yet.

The powerful impromptu demonstration was sparked by news of a mass shooter a Walmart in El Paso, Texas, who left at least 20 dead and injured dozens on Saturday, according to the Texas Tribune. Protest attendees, most of whom "were already in the nation’s capital for a conference," chanted in protest of Congress' lack of action on gun safety, holding signs with slogans like “End white supremacy" and "We stand with all gun violence victims," to name a few examples.

"In the wake of yet another horrific mass shooting, hundreds of Moms Demand Action & #StudentsDemandAction volunteers have converged on the nation's capital, demanding lawmakers act to end gun violence," Moms Demand Action's Twitter account said about the protest. "If they won’t act, we will replace them with them with those who will."

A supporter retweeted the group's message with a pointed note of her own, stating: "To the politicians out there offering more thoughts and prayers, DO YOUR DAMN JOBS!!!!!"

Jason Feinblatt, president of Everytown for Gun Safety, another non-profit advocating for common-sense gun laws, added, “This is a public health crisis, full stop. Americans are angry, and we demand action from lawmakers, beginning with the Senate passing legislation to require background checks on every gun sale and strong federal Red Flags legislation.”

Speaking of legislation, this past February, the U.S. House of Representatives passed legislation in a 240-190 vote that would require background checks on all gun sales, sending the bill over to the Senate for a final vote. The Senate, however, has not voted on the bill, aka the Bipartisan Background Checks Act of 2019, since.

Red Flag laws, also known as Extreme Risk Protection Orders (ERPOs) or Gun Violence Restraining Orders (GVROs), have cropped up in many states following the recent uptick in mass shootings and have even been introduced to Congress in the past. The legislation, first introduced on a state level by Connecticut in 1999, allows a civil court order to be issued by a judge after a consideration of evidence provided by a family member or law enforcement officer, according to Giffords: Courage to End Gun Violence. The orders temporarily prohibits access to guns by individuals who pose an elevated risk of danger to themselves or others.

According to a report by the Educational Fund to Stop Gun Violence, the restraining orders have proven to save lives. Following 14 years of implementation in Connecticut, 762 risk warrants were issued, and an estimated 38 to 76 people's lives were saved.

Organizations like Moms Demand Action are pushing for this kind of change on a national level. And the organization's work is incredibly important because firearm-related violence is the leading cause of injury and death in the United States, with one or more mass shootings taking place per day in 2019, according to the Educational Fund to Stop Gun Violence.

Leaders in Congress, however, like Senator Mitch McConnell, have seemingly stymied any possible legislative action from advancing. And a growing number of politicians, including Bernie Sanders and Senate Minority Leader Chuck Schumer, are calling on the Senate Majority Leader to reconvene despite the August recess and take action on the Bipartisan Background Checks Act of 2019.

With an overwhelming number of organizations like Moms Demand Action pushing for change and politicians calling on Senate leaders to take tangible steps, the topic of gun safety has yet again taken center stage in the aftermath of two deadly shootings. Whether or not it leads to legislative change remains to be seen, but one thing is clear: parents aren't backing down from this fight anytime soon.