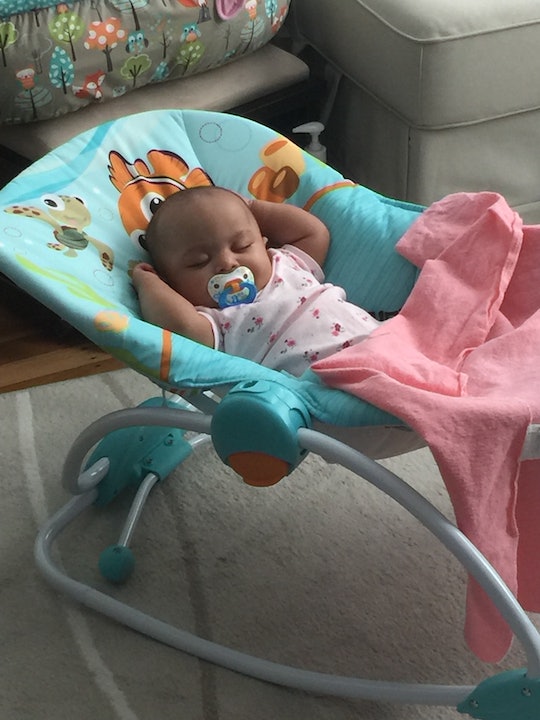 Moms, The Pacifier-Shaming Needs To Stop

When I was pregnant, I remember how exciting it was to put together my registry. As I walked down the aisles, I swooned over all of the cute outfits and toys, but I was also overwhelmed by all of the decisions I had to make. Should I get organic diapers and baby wipes? What kind of bottles were best? I scrutinized every ingredient in lotions and body washes. I read every warning and review before I added an item to my registry. But the one thing I didn't research or even think about were pacifiers, because I avoided that section entirely. I had been taught that pacifiers were the devil, but now that my daughter actually uses a pacifier and I've done my research on them, I'm here to tell you that they are totally fine, and the pacifier-shaming needs to stop, once and for all.

Even before I was pregnant, I had been warned to avoid pacifiers like the plague. "It will ruin your baby's teeth," some people would say, or "Only lazy parents use pacifiers." Others claimed it would prevent my baby from learning to latch if I wanted to breastfeed. My family generally hated pacifiers, and so did my husband's family. So we decided that we didn't need or want our baby to use a pacifier, ever.

Like all new parents, my husband and I struggled after my daughter was born. We tried rocking, shushing, cuddling, and feeding, but nothing would soothe our daughter. After months of exhaustion, we kept trying to find a magic solution. We swaddled tighter, we swaddled less, we tried playing music. We tried everything, but she just cried and cried.

When my mother-in-law was visiting, she saw a pacifier in my daughter's crib. Her eyes almost fell out of their sockets.

At doctor's offices, grocery stores, and restaurants, we saw quiet babies happily sucking on pacifiers. Even though I was secretly envious at how calm those babies were, I admittedly judged their parents and swore I'd never be like them. But in the meantime, we were still struggling to keep our baby happy.

As time went on, I was tempted to just run to the closest store and buy a pacifier, especially during doctor visits that were not so pleasant, or in the middle of the night when she was fussy and we couldn't figure out why. I pushed those thoughts to the side, because I didn't want to ruin my daughter's teeth or give in simply for my own selfish needs. But one day, we decided to buy a pacifier "just in case". We kept it in the house and said we would only use it if we absolutely needed to.

Pretty soon, we started using pacifiers as a last resort. If she was crying uncontrollably during her witching hour and nothing we did worked, we would try a pacifier. And sometimes it helped. Soon we started using it during her vaccinations, which made doctor's appointments so much easier.

We were shocked that a lot of the information we had gotten from family and friends about pacifiers was not true at all.

Having a pacifier around made me feel less stressed out, and my daughter was happier, too. But I still felt really guilty. So my husband and I did some research. We were shocked that a lot of the information we had gotten from family and friends about pacifiers was not true at all.

We found out that pacifiers can actually reduce the risk of SIDS and encourage a baby to self-soothe. And as far as causing tooth problems, pacifiers usually do not cause any issues as long as the baby is weaned by age 2. The only drawback we could find was that some experts believe pacifier use might increase the risk of ear infections, but there haven't been many studies done to prove a conclusive link.

One day, when my mother-in-law was visiting, she saw a pacifier in my daughter's crib. Her eyes almost fell out of their sockets. She scolded my husband and said that it would cause our daughter to develop crooked teeth. She wouldn't shut up about it for weeks.

Shortly afterwards, we attended our first family function. We were nervous, because this was the first time my daughter would be around so many people, and we were terrified of her getting sick. She kept touching everything and everyone and trying to put her hands in her mouth. My husband turned to me and asked for a pacifier. He figured if she had one, she wouldn't be able to put her hands in her mouth, and maybe it would reduce her risk of being exposed to germs.

The outrage was immediate. "Hope you're saving for braces," someone said. "We never used that with our children," another chimed in.

Immediately, a family member approached us. "You guys use those?," he asked, pointing to our daughter's mouth. He looked disappointed.

My husband and I looked at each other nervously. "Only sometimes," we said in unison.

The outrage was immediate. "Hope you're saving for braces," someone said. "We never used that with our children," another chimed in. People seemed proud to announce that they were such good parents that they never needed to use a pacifier, the implication being that we should be ashamed of ourselves for being one of those bad parents who did.

To be perfectly honest, I acknowledge that there are drawbacks to pacifier use: for example, I hate that the pacifier is yet another thing I'll have to wean my daughter from. But it's also helped me during times when I felt I had no help at all. I'd so much rather see her happy than suffer through hours of her crying, just because my pride prevents me from using a pacifier.

Using a pacifier is not the worst thing a parent could do, and it doesn't make me a bad mom. I'm a tired mom who's just trying to do the best that I can.

I wish I didn't need a pacifier, and I wish I could just figure out another way to soothe my daughter, but I can't deny that it works. Babies are born with a natural suck reflex, and sucking gives them comfort. Why would I ever want to deny her comfort?

As parents, we all do things in desperate times to calm our babies, and as long as we're not causing long-term damage (which I don't think we are), we shouldn't be ashamed of it. Using a pacifier is not the worst thing a parent could do, and it doesn't make me a bad mom. I'm a tired mom who's just trying to do the best that I can. And if I need to use a pacifier for the time being, I will.