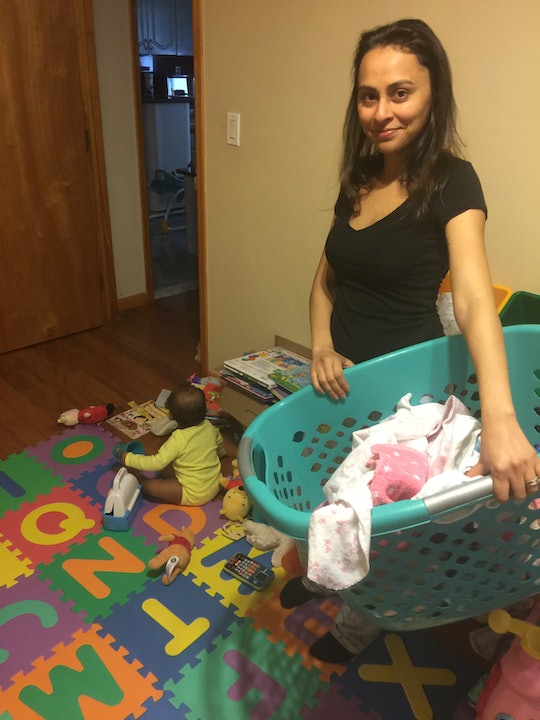 Moms, The SAHM-Shaming Needs To Stop

When you become a mom, you open yourself up to criticism on a whole new level. Thanks to the rise of social media, moms are now arguably judged more harshly than ever before. We're divided over everything: vaccinations, sleep training, formula-feeding. It can often seem like moms are pitted against each other, instead of actively supporting each other.

Since I became a mother, I have been shamed and judged in countless different ways. But I never expected to be judged for being a stay-at-home mom. It was never my plan to become a stay-at-home-mom, but due to complications during my pregnancy, I eventually stopped working. During my first trimester, I had a lot of unexplained bleeding and was told to take it easy. I was told to avoid lifting anything heavy and to get as much rest as possible. At the time, I worked with children, so it was nearly impossible to follow my doctor's orders. Shorty after, I was diagnosed with gestational diabetes, which required more doctor visits. I needed to take lots of time off, so I decided to put my career on hold for a while. After I had my daughter, my husband and I decided that we wanted her to be cared for at home, so I didn’t resume working. I eventually want to work again and pursue a career, but right now I’m focused on being a mom.

I don't see why this is anyone's business, or why people feel the need to voice their objections to my decision. Why is staying at home to care for my child such a bad thing? Shouldn't it be my right to choose who cares for my daughter? It's a catch-22: if a woman works, she doesn't spend enough time with her children; if she decides to be a SAHM, she's spending too much time with her kids.

I didn’t necessarily expect anyone to praise me for my decision to become a SAHM, but I also didn’t expect anyone to shame me, either. A few months after I gave birth, my in-laws and friends started bombarding me with the question: “When are you going back to work?” When I explained that I wasn't going back to work anytime soon, people were shocked and disgusted. If I posted articles, quotes, or memes in support of SAHMs, I received negative feedback. If I said I was tired or stressed out, people were baffled. They assumed that because I was at home and not working, that I was on some kind of vacation.

Most, if not all, of the shaming came from other moms. At social gatherings, family members asked me what I did all day, and why I couldn't just let someone else watch my daughter so I could return to work. I hated when people tried to make me feel like I was lazy, as though I was putting all of the burden on my husband. People asked us about our finances, as though me not working would cause us to go broke. It was intrusive, and I felt like my husband and I had to defend ourselves all the time.

When you're a mom, posting a picture, updating your status, or simply having a conversation with another parent seems to open you up to judgement.

All of the moms in my circle are working moms. When I decided not to work, they started treating me differently. They acted as though I was inferior to them, or like I was a sad example of a woman. They would say things like, “Well, I couldn’t stay home all day long and do nothing," and, “I have to contribute to my household, because that’s how I was raised." But as all SAHMs know, I don’t stay at home all day long with nothing to do. I do contribute to my household — just not monetarily.

I'm not sure why moms feel the need to call out other moms for their parenting decisions, instead of minding their own business. Chrissy Teigen, for instance, faced a lot of heat shortly after her daughter's birth when she went out for dinner with husband John Legend. People were concerned about her newborn baby, and questioned why she was returning to "normal" activities so soon after birth. It's frustrating that when you're a mom, posting a picture, updating your status, or simply having a conversation with another parent seems to open you up to judgement.

I think there’s an enormous stigma associated with being a SAHM: that we’re not ambitious, that we do nothing all day long, and that we took the easy way out. Some people think we are setting women back. But isn't feminism about making choices? Shouldn't moms have the chance to choose between being working moms and SAHMs, or somewhere in between? No one has forced this lifestyle on me, and luckily, we live in a time when I can make my own decision in the matter. What I do for a living shouldn't define me.

Being a SAHM is the hardest job that I have ever had in my entire life.

I know that not all woman can stay at home with their children, or perhaps they simply do not want to, and that’s totally fine. But this is what works for some families, and it works for mine.

I’m here to tell you that the SAHM-shaming needs to stop. SAHMs are not lazy; we have hopes and dreams. Perhaps we had careers, or will have careers in the future. We never get a break or even a few minutes to eat, and sometimes it gets incredibly lonely. If I’m being honest, being a SAHM is the hardest job that I have ever had in my entire life. And the shaming doesn’t make it easier. I’m not asking for recognition, but simply for the bashing and shaming to stop. I may not be a traditional working mom, but I work my a*s off, and I’m a mom, and that’s enough for me — at least for now.