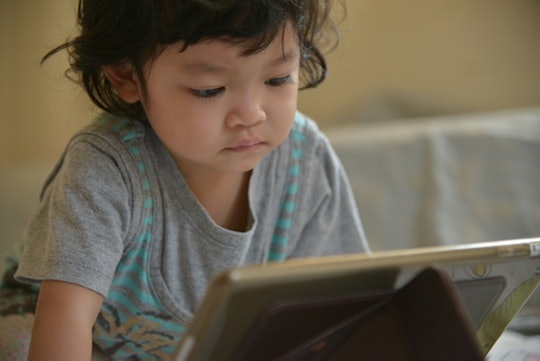 Parents are terrified of letting their kids have too much screen time. In the parenting community, there's a belief that too much screen time can severely damage a child’s development, and iPads have been blamed for everything from poor eyesight to high blood pressure to childhood obesity. Even actor Salma Hayek has weighed in on the matter, telling moms not to give their kids iPads: "Now it’s so easy to just entertain [kids with a screen], and you don’t have to go through complaining for an hour about dragging them places...make them a part of your life. It’s about the human connection, and the things they can learn from participating in life. Otherwise, isolation starts to happen."

Let's face it, iPads help to keep children entertained. If you've got a toddler who can't sit still, why can't an iPad be used to keep them calm in a public place? Children, especially toddlers, can be restless and volatile, so for many parents, iPads can be a saving grace — and even if you disapprove of other parents using them, it's actually none of your business.

Like many other toddlers, my son has boundless amounts of energy. He gets more than the recommended 60 minutes of physical activity per day, and he’s always on the go. But I'll admit it — he also gets a lot of screen time, and I have absolutely no problem with it. In fact, I’m pretty impressed that my 2.5-year-old can adroitly navigate his way around an iPhone and an iPad to find his favorite apps and games, using them with ease and precision. How could that possibly be a bad thing? It doesn't prevent him from going to the park, playing with toys, or drawing with crayons; to him, it's just another toy to use indoors.

It's a welcome and necessary distraction, and I won't apologize for it.

Screen time also has the benefit of being educational. My son uses the iPad to listen to nursery rhymes and learn new words and numbers. He loves repeating words and putting together sentences, and he loves coming to me to show me what he's learning. Research shows that screen time can be a valuable tool in developing communication, language and literacy skills. It also helps us bond, because I tailor our screen time to match his interests. We'll use an iPad to do family exercise, or we’ll watch music videos and “dance it out” together.

Of course, to be perfectly honest, the iPad does serve another, more selfish purpose: sometimes, it's a way to distract my son when I work from home, so I can get projects done. He’ll watch YouTube Kids for some time before getting bored and moving onto a different activity, which gives me a small window of uninterrupted work time. It's a welcome and necessary distraction, and I won't apologize for it.

I often feel like I do have to apologize for letting my kid use an iPad, though, because the screen time-shaming has gotten out of control. Earlier this month, for instance, an Australian mother wrote an open letter shaming another mother for allowing her daughters to use their iPads in a pub, on the grounds that the iPads distracted her own kids. Her argument didn't make any sense to me: just because her children got distracted by iPads doesn't mean other children shouldn't have them. What business is it of yours how another mother chooses to parent her child?

It's also important to consider that children with learning/ behavioral difficulties might actually benefit from iPads. While there's no hard research to support this, I've read a number of articles about iPads helping to keep autistic children calm and engaged so they can be more comfortable when in social spaces. Why should parents be judged and criticized in these circumstances? Must these parents be forced to defend themselves to no end?

Screen time-shaming reeks of class privilege: if you can afford extra help around the house, you're probably less likely to need to use an iPad as a babysitter, but for everyone else, it's a necessary part of everyday life.

And what about parents who don't have help — like, for instance, single moms? Should they be shamed or branded as "lazy" for using technology as a way to entertain their kids, if it means they can get chores or errands done? Screen time-shaming reeks of class privilege: if you can afford extra help around the house, you're probably less likely to need to use an iPad as a babysitter, but for everyone else, it's a necessary part of everyday life.

Ultimately, every child is different, and parents give their children iPads for many different reasons. It's up to the parent to pay attention to their child's screen time and see whether it affects them positively or negatively.

While I can appreciate people’s fear of how technology can affect their kids, I think we should instead be enabling children to use tech in healthy, constructive ways. Screen time doesn’t have to mean your kid is sitting in front of the TV all day, nor does it have to mean she's spending all day gaming on MMORPGs. Why not find videos that can help your child learn phonetics, letters, shapes, numbers, and colors? Or why not enroll your child in kids' computer programming classes? As soon as my son is old enough, I plan to do this by introducing him to websites like CodeAcademy, Code Monster and Hackety Hack.

That said, there are a few proven drawbacks to too much screen time: according to research, it can disrupt sleeping patterns in children as well as adults by reducing the production of melatonin, an essential hormone that controls your sleep/ wake cycle. That's why it is suggested that both kids and adults go screen-free at least thirty minutes before bed.

Vilifying and shaming moms for choices regarding their children's technology habits is rash and unwarranted.

Still, I wish people would realize that while you have the power to limit your child's screen time, you probably don't have the power to prevent it, full stop. In this day and age, technology use at an early age is inevitable. It's not up to you to keep kids from screens. It is up to you to teach them how to use technology in a more effective, productive, positive and informative way.

Ultimately, every child is different, and parents give their children iPads for different reasons. It's up to the parent to pay attention to their child's screen time and see whether it affects them positively or negatively. But vilifying and shaming moms for choices regarding their children's technology habits is rash and unwarranted. It might be nice to think of modern parenting as engaging in conversation all day with your child, or spending every day at the park or the zoo. But that's not how I experience motherhood — and I'm pretty sure it's not how you experience motherhood, either.

More Like This
12 Helpful Tips For Hiking With Kids
15 Adorable CoComelon-Themed Costumes You Can Buy Or DIY
Sex And Mom Guilt: When I Date Someone New, Am I Cheating On My Kids?
Dr. Jill Biden Just Delivered Some Frank, But Powerful, Advice On Motherhood