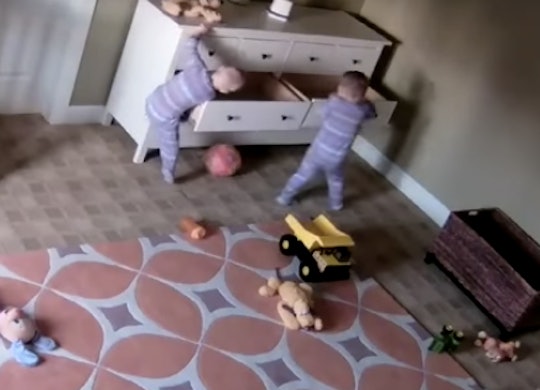 The Video Of Two Toddlers Teaches A Crucial Lesson

On Tuesday morning, a rather scary video went viral: captured by a room monitor, the video depicts two twin toddlers playing near a dresser. Then, one boy decides to climb into one of the dresser's open drawers, leading the piece of furniture to collapse onto him in a rather heart-wrenching moment. Luckily, the video also shows his twin brother lift the dresser off of him, leaving viewers with a happy ending to an otherwise scary video. But there's an important lesson buried in this mom's video of her toddler lifting a dresser off of his sibling, and it's one all parents should take note of: since kids can (and usually do!) get into anything and everything, it's incredibly important to secure your furniture.

Mother Kayli Shoff told 14 News that her 2-year-old twins, Bowdy and Brock, were always "super rambunctious" — but neither she nor her husband heard a loud thud or the boys cry out when the incident occurred. However, when they woke up and saw that the dresser was tipped over (despite both boys still playing happily in their room), they decided to review the monitor footage, leaving them horrified. Shoff was unsure whether she should share the video, but decided it was important to let parents know just how quickly an unsecured furniture accident could occur.

"Everybody needs to bolt down their dressers to the wall. I mean, we just didn't think about it," she told 14 News. "Accidents are gonna happen, so, we just want to spread awareness to this one accident that happened and hope that it doesn't happen to any other families."

According to the Consumer Product Safety Commission, every 30 minutes a child is sent to the emergency room due to fallen furniture or a tipped television, and every two weeks, a child is killed by falling furniture or appliances. To reduce the risk of this hidden danger, parents should be anchoring heavy furniture, making sure toys (and other tempting objects) aren't kept out of reach, and buying sturdy, anti-tip furniture.

With the number of household accidents that occur on a daily basis, it's clear that the Shoffs aren't the only parents who have witnessed their kids hurt by a piece of furniture. Luckily, both Bowdy and Brock were uninjured, and the dresser is now firmly mounted to the wall. And hopefully, the frightening video of their early-morning dresser mishap can help inspire other parents to firmly secure their furniture to their walls, as well.