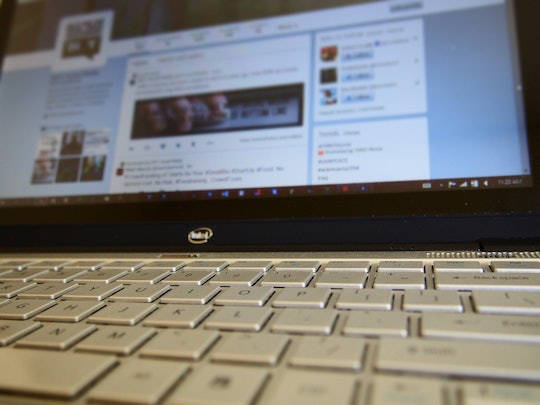 You've really got to hand it to Haylee Bazen. Her 3-year-old son, Zackary, happens to be super into princesses at the moment. The two were waiting for the bus recently, and, as one might expect from a kid that age with a newfound passion, Zackary was not only talking about his favorite princess (Snow White), but he also dressed as Elsa. That's when a rude stranger accosted them, so the British mom then went home and composed a viral letter defending her son wearing a dress on Facebook, which is a much better response than the torrent of swear words I probably would have unleashed.

Bazen told TODAY that the strange woman first interrupted her to ask if she was "punishing her son for bullying girls by making him dress like a girl." Yes, I know, I literally can't even as well. When she said no, the woman then told Bazen that she "should be embarrassed" for letting Zackary wear a dress. Bazen explained in her open letter that she was not sorry or embarrassed, because Zackary "can be who he wants to be," and on that particular day, he wanted to be a princess. Hell yeah, girl, give it to her.

Bazen then detailed how her well-rounded child plays with "cars and dolls, princesses and pirates," "rides his scooter or pushes his pram," and "wears zombie face painting or lip stick." Very awesome, little dude. The post has been shared more than 31,000 times, so it looks like Zackary is doing just fine without the approval of some sexist busybody at the bus stop. Bazen told TODAY that Zackary loves dressing up, and "I can't see how it's harmful in any way to support my [son's play] and if that means him playing in a princess costume, that's fine by me." It's especially cool of her considering that she's brand new to the princess game herself; she said that just a few months ago, "I didn't know my Belle from my Cinderella."

She closes her letter with some strong words for the anti-princess vigilante:

So next time you see us, dressed as a princess or cowboy, keep you disapproving stares to yourself and unless you want to tell him how great he looks keep your poisonous words to yourself too. Your the one that should be embarrassed to leave the house not us!!

Honestly, I can't even wrap my mind around a person who thinks a child playing dress-up is somehow offensive, yet policing strangers' clothing and parenting is A-OK. Luckily, the future belongs to kids like Zackary, who's being raised to value tolerance over conformity. Great job, Mom.