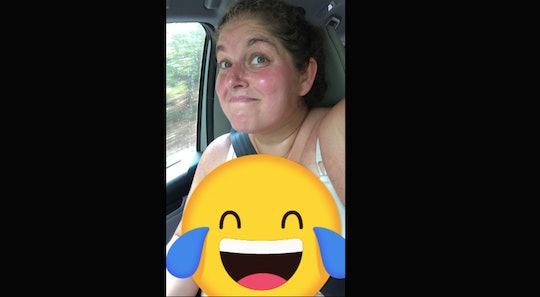 Parenting can get you into some pretty sticky situations, some of which require a very strong stomach. Mom-of-three Brittany Berry found this out firsthand after a day at the park that will literally go down in history as one of the messiest on record. Let's just say that poop, slides, and a ton of wipes were involved. So it's really no wonder why this mom's viral post about cleaning her kid's poop off a slide has gone viral.

Berry somewhat reluctantly took to Facebook Monday to unload the whole poop-filled saga. "Today after I picked up Sadie from school we went to the flood wall so I could run and they could play at the park afterwards," she began her story. "After my run, I’m sitting at the picnic table, exhausted, drenched in sweat, watching my babies play, vowing to join them as soon as I rest up. At one point Sadie goes down the slide and then walks in front of me and I see 'wet' shorts."

Although Berry wasn't phased by a possible poopy diaper, the tables turned when she realized the situation was way worse than she had thought. "Then I start to change her and I realize it’s a poop-trophe. I’m talking one of them poops you usually see in a newborn, where it’s all up then back and down their legs and you contemplate just throwing the whole baby away," she wrote. "Still ... I’m not panicked ... been there, done that, multiple times."

But as luck would have it, Berry only had four wipes on her because she had recently cleaned out her car. "At this point, Sadie’s just standing there naked in an empty (thank God) the parking lot, with poop up her back in her hair, down her legs to her knees, even on her shoes, because taking her clothes off did not go as smoothly as one would hope," she continued.

There is no panic like the panic of running out of wipes in the middle of a poopy diaper change. I am so feeling this mom right now. But now there's poop everywhere and it's a legit mess.

Unfortunately, things didn't improve from there. "Then I hear it.... that painful SQQQUUUEEEAAAKKKKK of skin getting stuck to a plastic slide on the way down. I look up and yes, of course, it’s Sadie. She’s going down the slide, butt naked, COVERED in poop, leaving a long skid mark of poop allllllll the way down on her way."

Holy mother of all that is holy. I can't even imagine what went through this mom's mind as she saw her daughter going down the slide. Sometimes a situation is so wild, you are literally at a loss for words. But the story gets better. Berry continued her saga saying, "At this point I just give up. I chase down Layla, wrap Sadie in a blanket and buckle them in their car seats and leave."

As Berry noted, leaving the poop as is "was not an option," so she rushed home to grab more wipes. And pausing here to point out how this mom deserves standing ovation right now. Even in this horrific situation, she's thinking about others.

After successfully cleaning the slide's rails and bottom/top portions, Berry found herself in a less than ideal position. "The middle of the slide I could not reach. I tried to climb up it, but was unsuccessful. Keep in mind I’m REALLY out of shape and just ran a mile and a half. It’s 90°, I’m WEAK, uncoordinated. To say I was struggling would an understatement."

So like a true MVP, Berry went head first down the slide (wipes in hand, of course) to fully clean it. "This was not easy. I did not look elegant or attractive, I’m sure," she joked.

Once satisfied with her job, Berry turned around to notice a family "glaring" at her. "I genuinely think that we’re afraid of me, after all, I was an overweight seemingly childless adult, on children’s playground equipment," she said.

Making matters worse? Berry soon realized she was covered in poop. And so she was forced to drive home in her bra.

End scene. Now if this doesn't teach you that parenting is a no holds barred contact sport that should require hazard pay, I don't know what will. This mom is a saint and deserves some relaxation and a shower (or twenty). You can't make this stuff up people... this is parenting.