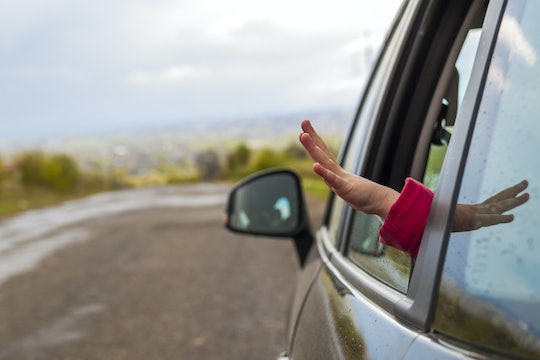 Everyone has heard a horror story about a baby trapped in a hot car in the summertime at some point or another — but it's one of those things that all parents swear will never happen to them. However, one mom's viral post about her child getting stuck in a car serves as a reminder to all parents of how quickly one small mistake can escalate into a scary situation.

She went on to explain how it happened: she was running into the house after she and her kids had returned from a trip to the pool. Amos had unbuckled her 4-year-old from his seat, then left him and his older siblings to walk in as she ran inside with arms full of gear and a full bladder (ah, the joys of being pregnant with twins).

"He often walks inside slowly, stopping to look at random crumbs in the carseat or ants on the ground," Amos wrote. "Our neighborhood is relatively safe, he knows not to wander off, he knows how to open the front door by himself. My older kids were also walking inside, he wasn’t even alone."

About 10 minutes after she'd gone inside, Amos realized that she hadn't heard her 4-year-old's voice in a while. She and his siblings began looking for him: in the bathroom, in his room, in the living room. They couldn't find him anywhere inside, and when they looked outside, they found him crying in the car.

"The doors were shut, he was sweating and sobbing with his face pressed against the window," Amos wrote. Her son had been looking for his flip-flop on the floor as his siblings got out of the car, and when they didn't see him on the car seat, they closed the door, assuming he'd already gone inside. He tried to open the door, but "the door handle didn’t open easily for him," Amos wrote, so he panicked.

Last month, the number of children who died of heatstroke after being left in a vehicle reached record numbers in the United States, with 29 deaths in 2017 by July 31. As Amos discovered, not all of those incidents are due to parental negligence, although that's what people frequently assume.

Fortunately, Amos opened the car door, brought her son inside, and nothing too serious happened. However, Amos decided to use the scary event as a lesson, and she advised all parents to do the same, writing:

Tomorrow my three year old will be practicing how to open the car from the inside all by himself: Opening the door handles, how the locks work, and how to honk the horn until someone comes to help if you can’t open the door. ... It’s not a thing that I’ve ever heard of or thought off–practicing how to get out of the car. But it should be. It should be something that preschool kids are taught, just like we tell them what to do in case of a house fire. We have fire drills. Why not car escape drills?

She urged all parents of young children to do the same — and to spread the word to their friends. After all, you never know when a car escape drill could prevent a tragic accident.