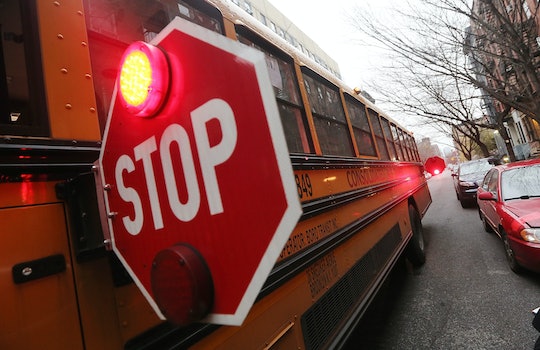 Back-to-school seasons means a return to the daily grind of morning commutes and afternoon pickups. But sometimes things don't always go as planned, even where it concerns something seemingly as simple as departing a school bus. And this mom's viral post about her daughter's close call while exiting the school bus is an important reminder for parents to be vigilant at all times.

Houston, Texas mom Josephine Kirk-Taylor was recording her daughter's return from school on her very first bus ride when the unthinkable happened: a speeding car failed to stop for the school bus and her daughter was almost hit as a result.

The video, simply put, is absolutely harrowing. You can hear Kirk-Taylor excitedly repeating her daughter's name and telling the other children that their big sister is on her way. The red stop sign on the bus is raised and the little girl walks around the front of the bus and takes her first steps to start across the street, a happy moment that's soon interrupted by Kirk-Taylor's frantic screams for her daughter to wait as a car speeds past in a blur, without stopping for the school bus. It all happens so quickly, you might have to re-watch it to get a sense of just how close the car actually came to hitting her daughter.

Kirk-Taylor documented the whole ordeal in a Facebook post (it has been shared upwards of 7,000 times as of Tuesday) to warn other parents of how easily something like this could happen to them, stating: "So today was my daughters first day riding the school bus. As we waited for the bus to arrive to pick her up this morning on the sidewalk near our home, when the bus finally pulled up she got on and took off for school."

She continued, "But when she came home today as I was waiting with her siblings at the same spot she was picked up from, I had no idea that she would be dropped off on the opposite side of the street."

Like many moms, Kirk-Taylor wanted to commemorate the day on video. But she ended up catching a lot more on film than she had anticipated.

She ended her Facebook post with a plea to drivers to be more careful and a request that fellow users share her story in hopes that everyone will be a little safer this school season.

In Kirk-Taylor's home state of Texas, the driving laws state that when a driver is approaching from "either direction a school bus stopped on the highway to receive or discharge a student," they must stop before reaching the school bus when the bus is operating a stop signal. "The driver may not proceed until the school bus resumes motion, the driver is signaled by the bus driver to proceed, or the visual signal is no longer activated," according to the Automobile Association of America.

Even with laws like these, accidents still happen. And Kirk-Taylor's story is a reason for all parents and caregivers to keep their eyes peeled when walking the streets to and from school. Kudos to this mom for raising awareness about this important issue.

More Like This
Over 10,000 Sippy Cups & Bottles For Toddlers Recalled Due To Lead Poisoning Hazard
30 Great Non-Toy Gift Ideas For Kids
The 4 Main Parenting Styles & Which Is Best For Kids
Viral Reddit Post Asks If A Toddler Can Watch Cartoons Without Headphones On A Plane