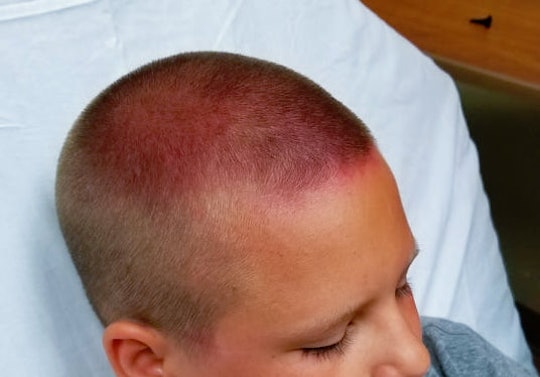 Though it may seem like a pretty innocuous playground activity, one mom's Facebook post about her son spinning too fast on a swing is serving as an important PSA for all parents. In a post that's now going viral, Rebecca Jordan cautioned parents about "what could happen when your child spins way too fast for way too long on a swing," with their head leaned back and hanging off the side like her son had been doing.

Last month, Jordan's son was playing on a "dreamcatcher" swing, the kind that looks flat, like a saucer, and is suspended in the air (not the kind you find on a traditional swing set). While playing, as Jordan shared on Facebook, he told his friends to spin him in circles, faster and faster, as kids tend to do. Jordan explained in her post, which now has more than 3,500 reactions and over 2,400 comments since it was first posted on May 30, that her son held his head out the entire time he was spinning, which can actually be quite dangerous to do.

A number of kids came inside to tell Jordan and her husband that their son didn't feel well and that he was saying his "brain hurt." And when they found him, it appeared as though the top of his head was spray painted or burned. The blood vessels in his eyes and eyelids had "burst from the extreme pressure," Jordan shared on Facebook.

Due to the centrifugal force of the swing, according to Jordan's post, blood had pooled at the top of his head at such a rapid rate that his body could not filter it out quickly enough, and he ended up with what is effectively an enormous bruise. "We were concerned about possible brain injury so we went to the ER," Jordan wrote on Facebook. "Keep in mind he never actually hit his head, this was only from the centrifugal force pulling while spinning on the swing."

In addition to the physical symptoms, Jordan explained that her son was clammy and was getting confused easily.

"At times he appeared awake, but we would speak to him and he wouldn't answer, and moments later he wouldn't remember us talking," she tells Romper. "It was terrifying because I had never seen this before. All the kids assured us he never hit his head. He became very emotional and said he was sleepy and his brain hurt or 'inside my head is burning.'"

Jordan and her husband decided to seek medical attention when they could not figure out what their son's symptoms were. At the time, they had about 13 adult friends over, six of whom worked in medicine, and were also confused. At the hospital, as Jordan shared on Facebook, they gave him a CT scan, and checked his ears for fluid. According to Jordan, the doctors and nurses were "puzzled and thought he spray painted his head because they have not seen this type of presentation of blood bruising before."

Fortunately, his scans came back normal, finding "no internal injuries or brain swelling," and Jordan says they they were discharged and told to monitor him for three to five days. According to Jordan, his official diagnosis was a "traumatic brain injury."

Sarah Ash Combs, a pediatric emergency room physician and Director of Outreach in the Division of Emergency Medicine and Trauma Services at Children’s National in Washington, D.C., shared with Romper that parents should be aware that Traumatic Brain Injury (TBI) can be caused by abrupt back-and-forth or acceleration-deceleration movement of the brain within the skull.

"If severe enough, this can cause bleeding around and/or within the brain itself. It also may lead to concussion, which I often conceptualize for my patients’ parents as a 'brain bruise' that needs time to heal," she explains to Romper.

Combs added that playground activities such as merry-go-rounds and swings can potentially pose a threat, but that generally speaking, when properly supervised, are completely safe and a great way to stay active and have fun.

However, this type of injury might seem jarring to those who have played on swing sets for their entire lives, and have had no such thing happen. Jordan explained that she and her husband were always encouraged to play unsupervised as kids, but that this type of issue reflects how much toys and recreation have changed.

"We had 'normal' swings, the ones on chains that only spin around 10 times. [Our] lives are now so advanced, and so are the toys are kids play with," she tells Romper. "As we advance we must also realize we are advancing the dangers that naturally come along with those things."

Fortunately, Jordan shared on Facebook that her son is doing well, and took about a week to heal physically. And today, he's back to his "normal, silly self," but the Jordans, as well as parents all over the country, have undoubtedly been left with an important lesson about safety and play.