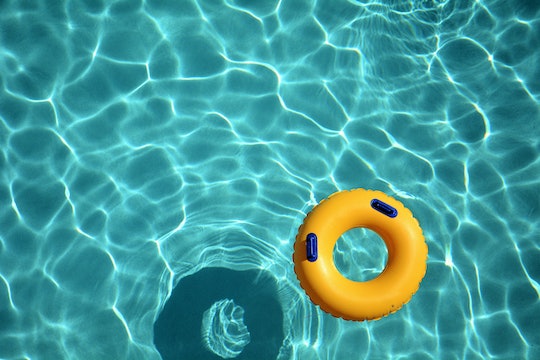 These last few weeks of summer will be filled with kids trying to embrace their final days in the sun without any school work or deadlines. Going to the pool during this time is inevitable, and in spite of lounging by the poolside all summer long, parents should still be reminded about the importance of water safety. After reading a mom's viral post about her son's near-drowning accident, parents will definitely want to be more aware of their children in the water. Her story can happen to anyone, and that's so incredibly scary.

Indiana mom, Maribeth Leeson, thought her 5-year-old son, Adam, was playing around at the pool on July 20. He was at a swim party with family and friends, swimming in a pool surrounded by adults. The last thing Leeson thought was that Adam could drown, even with so much support around him, but that's exactly what happened. Leeson detailed this scary realization on her Facebook page earlier this week in a heartbreaking post that should be required reading for parents before their kids head into a swimming pool.

Adam drowned in a friend's swimming pool, according to Leeson's post, and remained unresponsive until CPR was administered. Once he regained consciousness, he was taken to the ICU at a nearby hospital where he stayed on oxygen for three days. Adam has no sustained injuries from his drowning, but experiences shortness of breath and coughing from too much physical activity, according to Indy Star. But his side effects could have been much worse. That's exactly why Leeson was compelled to share her son's story.

"I've read so many stories about kids slipping away and getting into a pool, to be found drowned shortly later," she wrote in the post. "I've never considered the possibility that my child could drown right in front of people who were watching him bob up and down from the bottom of the pool to just below the the surface, but didn't think he was struggling because he looked like he was PLAYING."

She brings up a very important point — drowning doesn't look like one scenario. Kids can drown by accidentally falling into a swimming pool with no one around, but they can also drown in a pool surrounded by family members. The statistics out there prove this.

In the United States, 10 people drown each day from accidental drowning, according to the Centers for Disease Control and Prevention. One in five people that drown from driving are kids 14 and younger. It's so common that most parents can't see it coming, according to the New York Times, no matter how many times they tell their kids to not go in the pool without an adult, no matter how confident parents are in the kids swimming skills.

"There's absolutely no way to drown-proof a child," Dr. Benjamin Hoffman, the medical director of the Tom Sargent Safety Center at Doernbecher Children's Hospital in Oregon told the The New York Times.

The American Academy of Pediatrics suggests a multilayered approach to preventing drowning, with different "barriers" to prevent this from happening. There should be a fence around a pool, an adult that can keep their eyes on the kid, and a person who knows CPR to potentially save lives. Being aware is the best thing that any person can do in a situation like this.

"I've never considered the possibility that my child could drown right in front of people who were watching him bob up and down from the bottom of the pool to just below the surface, but didn't think he was struggling because he looked like he was PLAYING," Leeson wrote in her Facebook post.

There's a reason why her Facebook post has gone viral — the thought of losing a life due to turning a blind eye is scary. These words can serve as an important reminder for any parent heading to the pool with their kids over the next month.

More Like This
Tips For Apple Picking With Kids
What PICU Means & What To Expect From A PICU Stay
Experts Explain Whether It’s Safe For Your Baby To Sleep On Your Chest
Can You Breastfeed After A Breast Lift? Experts Explain