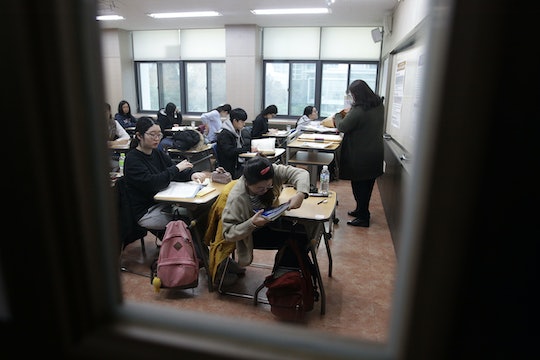 You Need To Read This Mom's Post About Standardized Testing

Standardized tests place a massive amount of pressure on students. Even in lower grades, students are expected to perform or be penalized. The result of such pressure is stress for everyone involved: students, parents, and teachers alike. Now, one mom's viral blog post on standardized testing is making the rounds for unsurprising reasons.

Frustrated mom and blogger Adrian Wood took to her blog after allegedly receiving a phone call from her crying son. The 9-year-old boy was complaining of severe pains in his jaw, but was afraid of missing his end-of-grade tests, or EOGs. Wood shared excerpts of their conversation in her blog post as well as the Facebook post that made it go viral:

He proceeded to tell me about his jaw and how it was really hurting. I asked if he wanted to come home, and he replied that he didn’t think he could because of EOGs. Of course you can, I said, it’s just a test.

In short, her son was afraid that he would be held back a grade if he didn't take the test, she claimed.

Wood has since escalated the issue all the way up the public school food chain. Her first step was speaking with her son’s teacher and the school principal in an effort to reassure her son that he wouldn't be held back. She claimed she even told her child a white lie to ease his nerves about not moving ahead:

I told him that wasn’t true. I got a letter telling me that you’re going to fourth grade, I said. I lied. How did it come to this? He’s a good student, only nine, and I’m reminded of his brother last year before the EOGs. I don’t know what else to do.

I can’t find one person that praises them or offers valuable benefits. I hear about showing growth, but who gives a sh*t? Schools at the top don’t grow, there’s no where to go. Tell me how EOGs and the pressure they bring benefit my family. What message are we sending to our children? How will they remember the days of elementary school? Will they remember the awesome teachers that nurtured them or will they only remember those tests? Tests that had little to do with amazing schools.

Romper has reached out to the state superintendent's office for comment on Wood's story and is awaiting a response.

Wood ended the post with a call to action for other parents and caregivers. “Today, I ask you stand up and come forward and say no to EOGs," she wrote.

Wood holds a Ph. D in Education and writes on the topic regularly for her blog, "Tales of an Educated Debutant." Her interest in public schools goes beyond professional and educational expertise: She has four young children currently enrolled in public schools. The blog post about EOGs was one part of her series of posts on education which she describes as "twelve stories surrounding our schools today."

Wood's post has now been shared over three thousand times, a testament to the controversial nature of standardized testing. The post continues to be shared and comments are still being posted. While not everyone commenting might agree with her sentiments, this mom has certainly stirred up an important discussion regarding the impact of testing on children.