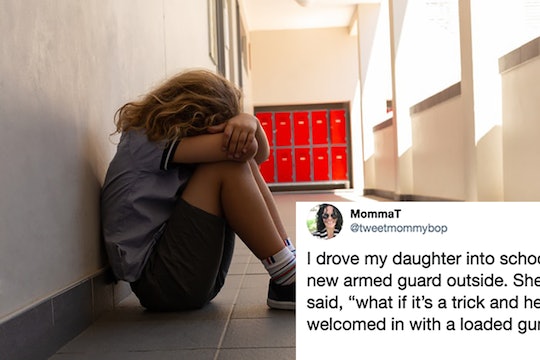 There have been 283 mass shootings in the United States as of Sept. 1 this year, according to CBS News. That's enough to make anyone scared to leave their home, especially since you never know what will happen. This is definitely a reason why this mom's viral tweet about gun violence in America is resonating so much with others — it perfectly captures the anxiety that people have in the anticipation of the next mass shooting in America.

Mass shootings can happen anywhere and it's hard to feel safe because of this. Movie theaters, parking lots, and schools are no longer the safe spaces that they once were before. Now, they're places where people are hyperaware of a mass shooting possibly happening. There are so many "what-ifs" associated with leaving your own home, and it's scary. Earlier this week, one mom took to Twitter to express her daughter's concerns about not feeling safe in her own school.

"I drove my daughter into school today," the mom who goes by "TweetMommyBop" on Twitter wrote. "She noticed a new armed guard outside. She started to panic and said, 'What if it's a trick and he's not a real guard and is welcomed in with a gun to kill us all.' — yeah, we f****** our kids up real good, America."

In the few days since posting it, the tweet has amassed more than 300,000 likes. People agree that this is what mass shootings have resulted in — anxiety from kids who have to go to school every single day.

Other parents on Twitter are now sharing their own kids fears about mass shootings — and it's incredibly sad. It's hard to hear how scared kids are to go to school.

"My three children have been traumatized by the active shooter drills," one Twitter user wrote. "I asked when they would be this year, as my plan was to keep them out of school, and was told I couldn't know and them not participating would be to the detriment of others."

"Walking to the bus stop this morning, my eight year old asked me if I had to do 'intruder drills' when I was in school," another Twitter user wrote. "I didn't have the heart to say 'no, never.' I just told him we had tornado and fire drills."

Harboring fear or anxiety about mass shootings is quite common with teenagers and kids in school, according to Teen Vogue. And seeing so many of these events in the news can take it's toll on kids, according to licensed professional clinical counselor Rachel O'Neill. "Students, they go to class, and they're sitting there, and even they're not consciously thinking about it, it's still part of their experience," O'Neill told Teen Vogue.

Students who already have anxiety can feel this even more. "Those individuals who have maybe preexisting depression or anxiety or something like bipolar disorder could certainly be triggered by these types of events, even if they are only hearing about them in the news," O'Neill told Teen Vogue.

Back to school season is now synonymous with fears of school shootings, according to The Atlantic. Instead of getting ready to create lesson plans and meet parents, teachers are now having to answer kids questions about shootings and assure the older kids that they are safe. It's taxing on everyone.

While increased security on campus might make parents feel safe, the Twitter user's daughter in the viral tweet actually pointed out something very important. Police officers in schools, or "school resource officers" are not proven or disproven to be effective in schools, according to NPR — during some school shootings, the SRO has been unable to stop the shooter. Instead, research has shown that these officers create unintended consequences for students and can lead them in to the criminal justice system.

In spite of President Trump assuring students they have "nothing to fear" and "nothing to worry about" this year at school, according to USA Today, kids clearly are very scared. This mom's viral tweet is proof of that.