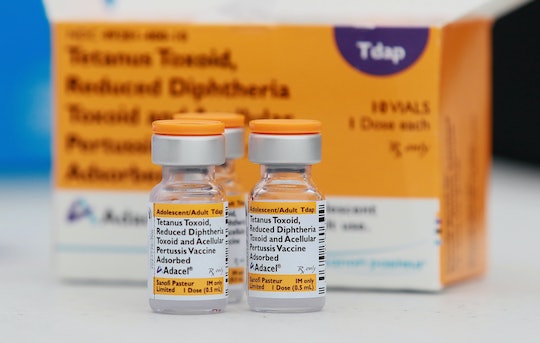 Why Pregnant Women Should Get The Tdap Vaccine

One of the largest studies ever completed on the effectiveness of immunizations against pertussis — commonly referred to as "whooping cough" — revealed some very important information for expectant moms. While parents are often told about the importance of infant and childhood vaccinations, it turns out that mom's immunizations can have a lasting impact on her baby's health. A recent study found that moms who get a Tdap vaccine while pregnant pass protection to their newborns.

Pertussis, which is often called "whooping cough," is a highly contagious respiratory infection that produces a very distinct cough — sometimes likened to a barking seal, or gasping noise, according to the CDC. While the symptoms of whooping cough might seem like a cold (runny nose, congestion, a fever) it's a much more serious infection. The CDC has found that half of babies who catch whooping cough wind up in the hospital with complications. One in 100 infants who contract whooping cough die from it. That being said, it's not a very common childhood illness anymore in large part because we have a vaccine for it. "Tdap" and "DTaP" vaccines are given to children and adults to protect against several diseases — whooping cough among them. But infants don't get their first (of five) DTaP vaccine dose until they're 2 months old — so how can they be protected for the first couple of months of life?

That's one question that researchers had when they set out to track 148,981 infants and their mothers to assess the effectiveness of the whooping cough vaccine. Although kids get their last dose of DTaP by the time they start school, "booster" shots of Tdap (the same vaccine, just a different ratio) are recommended through the teen years and into adulthood. The booster shot is specifically recommended for pregnant women and anyone who will be living at home with the baby. The idea has always been that if a new baby's family, or those who will be in close contact with them, are vaccinated, it will help prevent the baby from getting sick in those early months of life before they can get their first immunizations. Now, researchers have determined that if a mom-to-be gets her Tdap booster shot while she's pregnant, when her baby is born, they'll have protection, too. That immunity can last up until the time the baby is ready to receive their own vaccine.

The study found that the likelihood of a newborn catching whooping cough in the first two months of life was reduced by 91 percent in babies whose mom's got the Tdap booster while pregnant. That protection wanes throughout the first year of life, reaching about 88 percent by the time the baby is ready for their first dose of DTaP, and goes down to 69 percent by the time the baby is 1 year old. While the Centers for Disease Control and Prevention's Advisory Committee on Immunization Practice's recommends that pregnant women get the vaccine between 27 and 36 weeks, getting it at any point during pregnancy is better than not getting it at all.

Even though this was one of the largest studies on the vaccine's effectiveness, it should be noted that all of the babies followed were from northern California. So, while the results certainly support the vaccine's effectiveness, researchers would need to follow up with a broader, nationwide study in order to generalize those exact percentages for the rest of the United States. In some parts of the nation, children may be more likely to contract whooping cough — particularly in states with high rates of unvaccinated children.