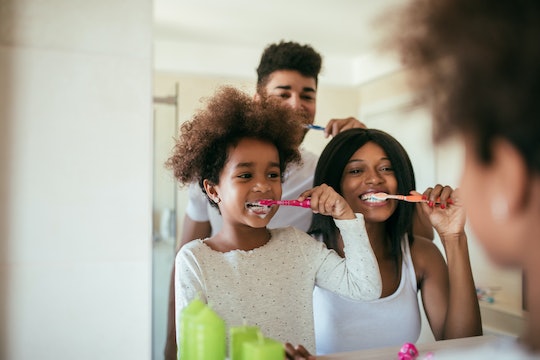 Moms With More Kids Are More Likely To Lose Their Teeth, Study Finds, But Don't Panic

The idea that children are hard on women's bodies (and their teeth!) is nothing new, but now there's some new evidence that supports this. In fact, according to a recent study published in the Journal of Epidemiology & Community Health, moms who have larger families are losing their teeth more often than women with fewer kids. Fortunately for moms of multiples, you aren't necessarily doomed to lose your teeth; preventative dental hygiene practices may be the key to retaining your molars after motherhood.

To determine how motherhood impacts dental health, researchers looked at data from the Survey of Health, Ageing, and Retirement in Europe (SHARE), which contains information on the health, educational, and household income of more than 120,000 adults 50 years or older from 27 European countries plus Israel. Included in that data is the full reproductive health and number of natural teeth of 34,843 survey respondents from Austria, Belgium, Czech Republic, Denmark, Estonia, France, Germany, Italy, Luxembourg, The Netherlands, Slovenia, Spain, Switzerland, and Israel, according to Science Daily. This information allowed researchers to examine the correlation between multiple children and missing teeth.

Using statistical analysis, researchers found that having a third child was associated with significantly more missing teeth for women, but not men. Researchers stated that their findings suggest that an additional child is harder on the mother's mouth health than on the father's, likely because of the impact of pregnancy on a mother's body and the tendency to prioritize the health of their children over their own. Along with a lower number of children, higher levels of education were also linked to lower risk of tooth loss in women.

This isn't the first study to suggest that having multiple children leads to dental complications. A similar study conducted by researchers at the New York University College of Dentistry in 2005 looked at the dental health of 2,635 pregnant women, finding that many had dental problems. What's more, "as the number of children increased, so did a woman’s risk of periodontal disease, missing teeth and untreated cavities," according to The New York Times.

Dental complications during pregnancy are very common, according to the American College of Nurse-Midwives. Pregnant women are at an increased risk of periodontal disease due to pregnancy gingivitis, a condition caused by hormonal changes during pregnancy that leads to gum sensitivity and bleeding, and the impact of morning sickness vomit on tooth enamel. For this reason, it is more important than ever that pregnant women receive treatment for any dental issues, but that is unfortunately not often the case.

A 2001 study out of the Centers for Disease Control and Prevention found that while a quarter of surveyed pregnant women reported dental health issues, only about half of them sought treatment. Leaving such issues untreated can have devastating results for both mother and baby, according to a study by the Society for General Microbiology. Bacteria from a mother's mouth can pass through her blood and amniotic fluid to her unborn child, potentially leading to an increased risk of a premature delivery, a low birth-weight baby, premature onset of contractions, or infection of the newborn child, according to another report from Science Daily.

Based on their recent findings, researchers at SHAPE concluded that education about the importance of dental hygiene during and after pregnancy may be the key to preventing tooth loss. They told Science Daily:

On the basis of our findings, enhanced promotion of oral hygiene, tooth friendly nutrition and regular (preventive) dental attendance — specifically targeted at expecting and parenting mothers — seem to be sensible strategies for clinicians and health policy.

All of the evidence seems to suggest that moms can greatly benefit from dental health care both during and after pregnancy, and studies such as these are an important part of informing parents that their own bodies need a little extra TLC from time to time, too.

More Like This
The Covid Vaccine For Kids Under 5 Has Been Sent To The FDA For Review
How To Properly Clean An Inflatable Pool
Tick's Head Gets Stuck Under Your Skin When You Were Pulling It Out?
Can The Baby Have That?