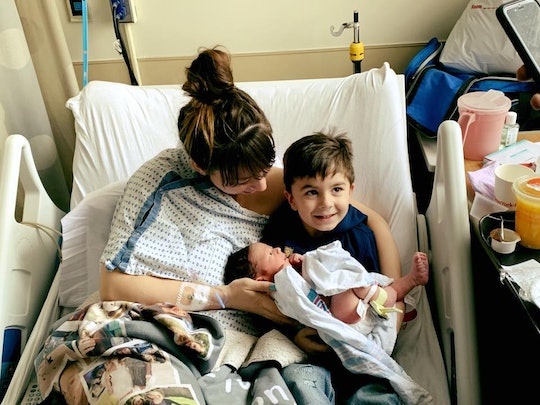 "Hey, even the kids don't want you around 100% of the time! Did you ever notice how they'll go off and play by themselves for a while? Make the time, take the time, and don't feel guilty! You always get a big smile from the children when you get back, don't you?" — an online commenter in a forum about looking after yourself after baby.

More Like This
Your Guide To Swimming Postpartum
Here's The Deal With Babies Who Sleep With Their Eyes Half Open
30 Vintage Photos Of Parents Giving Their Babies A Bottle
Postpartum Sex Pain: Why It Hurts & What You Can Do

I'm holding my unruly 7-week-old son in one arm as I attempt to catch the puke coming out of my 4-year-old son's mouth. I haven't showered in two days, so I don't mind the five-minute-old spit-up running down my chest as my 4-year-old heaves and gags. My 7-week-old was released from the pediatric intensive care unit five days prior after battling RSV, so I'm frantically trying to keep him away from my son's third round of vomit in the last 30 minutes and internally panicking that my efforts are futile at best. He's squirming on the edges of my hip, stopping only to let out a bowel movement that quickly seeps through his onesie and onto my shirt, pants, and skin. My phone is sitting on the coffee table so I can talk to the pediatrician via speaker phone between retches — he's promising me that, no, I won't have to take both of my children to the emergency room at 10:00 p.m. on a Thursday night. Not yet, anyway.

I'm overwhelmed. I'm disheveled. I'm a human meme of every "exhausted mom" trope our culture loves to both mock and hold up as the pinnacle of parenthood.

When my son finally stops throwing up and I put him in bed, take his temperature, make him soup, talk him into taking a sip of water, put a cold washcloth on his forehead, coax him into downing the recommended amount of children's Tylenol, and finish my 45-minute conversation with the on-call pediatrician, I text my partner while sitting on our couch and breastfeeding. He works nights and wants to know what's going on, if only so he can remain informed. After a break-down of the last hour — which can only be described as hellish — he politely reminds me that through it all I need to remember to take care of myself.

And that's when I start to cry.

We, as a society, tout the importance of taking care of moms in a variety of ways. We laud the benefits of self-care, usually in expensive spa-form. We talk about "putting on your oxygen masks" before you assist others. We hold up the value of "villages" and encourage parents to find or build their own. We celebrate whatever clichéd garbage is written in the Mother Day cards we haphazardly remember to send once a year, along with a gift certificate to a nail salon or overpriced brunch. But rarely, if ever, do people actually take care of the mom in their lives. No, the onus on taking care of a mother falls on the mother herself. She must add "self-care" to her never-ending list of obligations and responsibilities and priorities. And make no mistake, in the year 2019, that list is only getting larger.

Twenty-seven percent of moms stay at home to care for their families, versus a reported seven percent of dads, Pew Research has found. And while more mothers are entering the workforce (either by choice or out of necessity), mothers are still handling the majority of household responsibilities, as a study in the Journal of Marriage and Family found. A 2017 study conducted by researchers Claire Kamp Dush and Sarah Schoppe-Sullivan found that after two cis-gendered, hetero working parents had a baby, husbands spent 46 percent of their time relaxing while wives focused on childcare, versus wives spending 16 percent of their time relaxing while their husbands tended to their child. The same study found that the amount of time men spent relaxing actually increased from 47 minutes to 101 minutes after their child was born. A reported 54 percent of parents in households where both the mom and the dad work full-time say that the mom spends more of her time managing the child's schedule, and 47 percent say the mom spends more time with the child when they're sick.

In those very same households, 62 percent of parents say both are equally focused on work. In a country without mandatory paid family leave, increasing child-care costs, and an infatuation with a "pull yourself up by your bootstraps" mentality that harms parents' mental health and deters them from seeking help, "reminding" a mother to invest her sacred time in self-care is not only pointless... it's almost cruel.

We're working full-time inside and outside the home, focusing on our careers and our children, managing schedules and appointments, tending to our sick babies, and Marie Kondo-ing our homes. But don't forget, moms: we have to find time to take care of ourselves, too.

I know my partner means well. He wants me to take care of myself because he loves me and doesn't want to watch me deteriorate under the weight of motherhood and work and the countless other responsibilities that come with adulthood and the life we've built together. He's not the only one that reminds me how important self-care is, either. Every day my mom says I should do something for myself. My friends, both near and far, remind me of the value of an hour at a salon or the gym or even a walk around the block. But these declarations of my self-worth do nothing but remind me that I haven't found that elusive "balance" I keep hearing about.

Finding time for self-care has become nothing more than another benchmark of parenting success. If I can go to the gym, I've planned accordingly. If I can take time to get my nails done, I've clearly managed my home sufficiently. And if I simply find time to take a shower and feed myself, well, I'm "winning" and that should be more than enough for us moms.

What I need is someone to actually care for me. To make me food and take my children so I can focus on myself and only myself. I need someone to see all the things I do for everyone else... and do them for me.

Do my laundry. Clean my home. Run my errands. Make my appointments. I know I need to take care of myself, and if knowing could get the job done, I would look flawless in my newly-cleaned clothes as I made my way to my weekly appointment for an hour-long hot-rock massage.

Instead, knowing I should be taking care of myself and failing to do so because my kids are sick and my emails are piling up as my maternity leave comes to a close and my partner works nights and I get less and less sleep does nothing but make me feel like a monumental fuck up.

I'm holding my sleeping 7-week-old son in my arms as my 4-year-old son plays on the floor. My phone vibrates on the arm of the couch and I know it's my cue to head for the door. A friend is coming to visit, her 3-year-old daughter in tow, and I'm hoping my desperate need for adult interaction isn't painted on my exhausted face. It's been two weeks since my newborn was released from the hospital, a week since my son was incredibly ill, and 30 minutes since I ran around my home trying to tidy up enough to make it somewhat presentable.

I manage to smile as I greet her at the door, her daughter standing on her tip toes in an attempt to see my newborn son's face. In a moment the baby is no longer interesting and she runs to play in my 4-year-old's room. My friend drops a bag filled with pre-made meals, gives me a hug, then takes the baby from my arms.

For the first time in almost two months I am not holding a child, worried about food, or caring about the state of my home.

And that's when I finally feel like I can breathe.