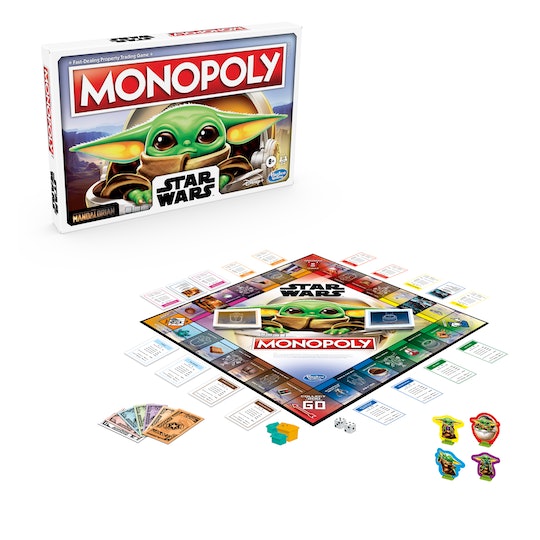 Game board devotees everywhere have been waiting for this. Since the inception of The Mandalorian, gamers have been wondering when the characters would start showing up in board game world, and that wait is over. Monopoly: Star Wars The Child is here, and now no one will be irritated that it takes six days to finish one game.

Now available for preorder from Hasbro Pulse, Monopoly: Star Wars The Child edition will cost $20, and will ship to you on Aug. 1, 2020. In this version, there are no thimbles, shoes, or horses for tokens. Instead, players will choose one of four different iterations of "The Child" to guide them around the board. And instead of American dollars, players will be trading Galactic credits to purchase mythosaur necklaces and hover prams to build their own little rebellion. The Baby Yoda Monopoly was created to feature artwork inspired by The Mandalorian live-action television series on Disney+, which gives it a real whimsical feel. (And don't worry, you have plenty of time to watch the first season before the game will ship to you, so get on that.)

This game will no doubt go a long way to ease the way for fans of the show eagerly awaiting Season 2 — which doesn't look like it will be delayed thanks to the fact that they wrapped filming early, according to GamesRadar. By means of trading credits and dancing a pram across the board, fans are able to immerse themselves into the world of Jedis, bounty hunters, and tiny green wielders of The Force.

As I have never come up for air from all things Star Wars, I can't help imagining the director of the series finale of The Mandalorian, Taika Waititi, and his daughters, playing this game with enthusiasm. (You must check out his Instagram for their antics.) If you haven't heard, Waititi has been tapped to direct and co-write a new Star Wars project, and just the idea that Baby Yoda might somehow be intertwined with the project has my rebellious heart glowing.

That doesn't mean that I'm going to go easy on my own kids while playing this game. When I play Monopoly, it's for blood, and Baby Yoda Monopoly? I would sooner go live like Luke on an island drinking blue milk from alien walrus cows before I give in. I'm that cutthroat. Also, I am curious about the milk, and since Disney is closed for the foreseeable future, I have no way of going to the bar to try it.