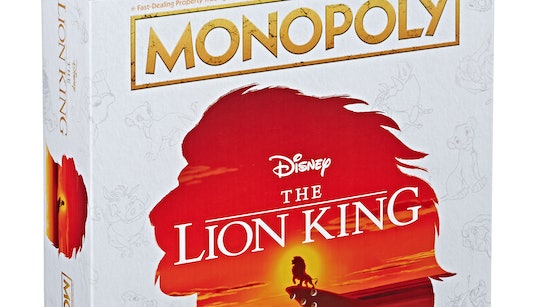 Disney's live-action and CGI remake of The Lion King is coming to theaters this summer, and that means we're about to see a lot more of Simba and Nala in the lead up to the much-anticipated film's release. There's some serious excitement around this movie, and Hasbro is getting in on the action with their release of a special "The Lion King" Edition of Monopoly. The new board game features artwork from the original film and will probably have die-hard fans singing "Hakuna Matata" from the moment they open the box.

It's hard to believe that it's been almost 25 years since the original Lion King came out, but this summer will mark the beloved film's quarter-century anniversary. In honor of that milestone, Hasbro is introducing a Lion King-themed version of its classic property trading board game (designed for ages 8 and up). It will be available exclusively Walmart on April 22 for $40, and then available at mass retailers starting in June, according to a company spokesperson.

The premise of this reimagined game is based on "Simba's journey to become king," and players can compete as either Timon, Simba, Nala, Mufassa, Pumbaa, or Scar. The little gold character tokens are totally adorable. The board itself, along with the Title Deed cards, are inspired by special moments and locations from the original Disney motion picture, like “The Circle of Life” or “Hyena’s Layer”.

Since Monopoly's trademark hotels and houses would seem pretty out of place on the wild savannah, they've been replaced by playful little beetles and grubs that pals Timon and Pumbaa would love, and instead of railroads, there are now four animal herds: the Rhino, Elephant, Antelope, and Wildebeest. You can see that this version of Monopoly is a little less capitalist and a little more naturalist.

The game's designers also mixed it up with the Chance cards, now dubbed Destiny cards. These cards are housed in a fun "Pride Rock" holder that plays a little bit of the iconic opening "Circle Of Life” song. How can you not get in the gaming spirit when you hear that?

I also love that this version of the game has a cheeky sense of humor. One Destiny card features Scar's famous line "Life's Not Fair, Is It" and requires players to pay 50 Monopoly dollars to the banker, according to Insider.

Playing this game remake seems like the perfect way to countdown the days until the Lion King film remake hits theaters on July 19. The CGI-powered film, directed by Jon Favreau and voiced by Donald Glover (Simba) and Beyoncé (Nala), is already getting a lot of attention. The trailer has racked up more than 27.5 million views, and nearly 44,000 comments, since being published on YouTube on April 10, 2019.

Now let's just wait to see how great the revamped, Beyoncé-fueled Lion King soundtrack is going to be. It could be the perfect thing to listen to while playing the Lion King version of Monopoly well into the night.