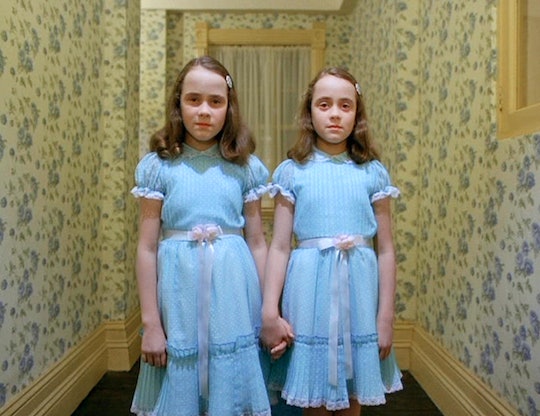 It's Time To Talk About Monster Periods After Birth

The blood begins to course down the door in a sheet that grows thicker and heavier, then thwacks its way up the walls with terrifying fanfare, exploding into a frothy wave: it is a horror scene, an analog for monster periods after birth. YOU KNOW WHAT I'M TALKING ABOUT.

Now I'm not talking about the bleeding that happens immediately after birth. (The term lochia comes from the Greek word for childbirth and — I'm not making this up — ambush. Like an ambush, when it comes to lochia you are never prepared for what you're going to find in your mesh undies. Also like an ambush, observing your lochia may make you think "This is clearly how I'm going to die.") Whenever I talk to postpartum folks about that window of time, at least one of them will use the term "blood clot the size of an apricot" and we collectively nods our heads because we've all been there. But within six weeks it's over. Your vagina, while likely not entirely "back to normal" is at least behaving more normally. This is a trap.

"Wait just a minute," you say, "I've been having periods since I was 11 years old and wore white shorts to Jason Carter's pool party! I think I know what a period is like!"

My sweet summer child, you have no idea. Just when you think you have found a dry-ground haven away from the deluge of lochia, along comes the monster postpartum period.

It will make you question everything. 'Where did all this blood come from? How am I still alive?'

Think about your pre-baby periods. Remember day 3? Your heavy flow day? You'll be begging for day 3. Because after you give birth, it's like day 3 times 10 every day. #BabiesAreABlessing. Here are some other things your period will be like after you've given birth...

It will make you question everything. "Where did all this blood come from? How am I still alive? How did this happen?" Then you calm down and think "This is OK. I can deal with this. I have a nice boss and a flexible work-from-home policy. I'll just... I'll hunker down. I've always been pretty regular, so I'll plan to lay low whenever I'm expecting my period.

SIKE! YOU FOOLISH MORTAL! YOU WILL HAVE NO IDEA WHEN IT'S COMING!

That's the real kicker. It could come every 28 days for two months when, all of a sudden, BAM! 16 days after your last period here's another one. And then, after that, 38 days later you're panicking that you're pregnant again because it's been so long when all of a sudden #bloodflood. When will the next one be? Could be 14 days, could be 57. Literally no one knows. It's basically early puberty all over again: your body is recalibrating itself, figuring sh*t out, so your cycle is irregular as hell, at least for a while.

And it's not just that you have more to work with (potentially). Dr. Duncan cites other reasons that may play a role in The Mystery of the Nightmarish Periods, including the fact that many new parents are now having their first periods in years that haven't been artificially shortened or lightened by hormonal birth control. Standard hormonal fluctuations that can occur after having a baby, particularly in the first couple years after giving birth, may also be to blame. Another potential suspect? Rose colored glasses.

"One thing to remember is that women who are having their first period after they’ve had a baby have gone a very long time without having a period," says Duncan. "So there’s definitely a little bit of selective memory."

These are all very reasonable explanations, but listen here, friends: the amount of blood we're talking about is so biblical that deep down I'm just chalking it up to the wrath of God.

But listen here: you've got this. Somehow we don't exsanguinate. We keep calm and we carry on. Horrifying periods are just another aspect of our lives that change once we give birth. It's annoying, inconvenient, but ultimately manageable. Keep your head high, your legs clenched around the overnight pad you have to wear all the time now, and remember: you're not alone.

Dr. Karen Duncan, OB-GYN and assistant professor in the Department of Obstetrics and Gynecology at NYU Langone Health