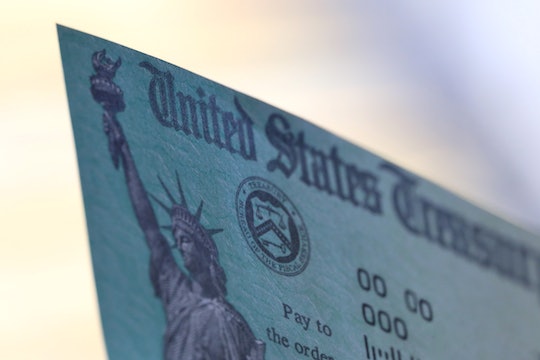 Families Could Receive Up To $10,000 During Coronavirus Crisis Under Senate Proposal

While Congress approved the CARES Act in March, many families have found the one-time stimulus payment provided by the $2.2 trillion relief package simply isn't enough to get them through the ongoing coronavirus pandemic. While tens of millions are out of work, bills continue to pile up. But a monthly payment proposal could provide families with reoccurring checks of up to $10,000 if approved by Congress and the president.

"The CARES Act gave Americans an important one-time payment, but it's clear that wasn't nearly enough to meet the needs of this historic crisis," Sen. Kamala Harris said in a statement released by her office when the legislation was first introduced. "Bills will continue to come in every single month during the pandemic and so should help from government. The Monthly Economic Crisis Support Act will ensure families have the resources they need to make ends meet."

Under the Monthly Economic Crisis Support Act, which Harris co-sponsored with Sens. Bernie Sanders and Ed Markey, individuals who earn less than $120,000 would receive a monthly check of up to $2,000 for the duration of the coronavirus pandemic as well as for the three months immediately following it. While individuals who make less than $100,000 would likely receive the full monthly payment of $2,000, payment amounts would gradually reduce for those whose income falls between $100,000 and $120,000.

While Harris, Sanders, and Markey introduced the Monthly Economic Crisis Support Act to the Senate on May 8, there's been little action on the legislation since. In fact, Senate Republicans appear to be largely against the idea of providing a second stimulus payment, let alone recurring monthly ones.

Earlier this month, Forbes reported Senate Majority Leader Mitch McConnell had said the next stimulus bill approved by Congress would be the last and would be smaller than the CARES Act. It's unlikely that a stimulus bill smaller than the $2.2 trillion CARES Act would carry monthly stimulus payments. What's more, Senate Republicans have also appeared to dismiss the $3 trillion Heroes Act passed by the House — which included a second one-time payment of up to $1,200 for each eligible individual and dependent — as "dead on arrival."

Harris, however, is still looking to drum up Congressional support for her Monthly Economic Crisis Support Act. According to CNBC, Harris recently accepted a change.org petition featuring the signatures of more than 1.2 million people who support the idea of $2,000 monthly stimulus payments. She plans to distribute the petition to other members of Congress in what's known as a "Dear Colleague" letter.

Harris has also recently pushed back on critics who've argued her bill would be too expensive to implement. "They're the same people who passed a tax bill benefiting the top 1% and the biggest corporations of America, and are going to cause us to face a $1 trillion deficit as a result," she said June 1 in a virtual town hall with former Democratic presidential candidate Andrew Yang, as Fortune reported. "If you want to talk about cost, you can't do that without talking about the benefit. And the benefit of this outweighs the cost, every way you cut it."