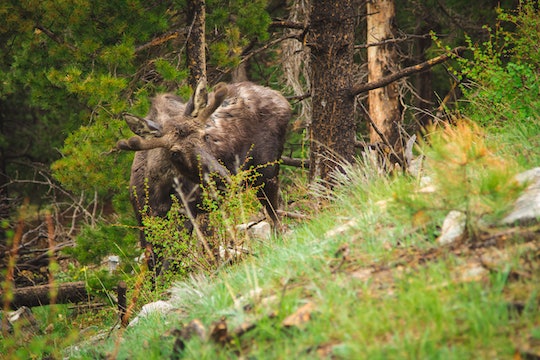 You guys, Donald Trump, known xenophobe and misogynist, could become our next Commander-in-Chief. Trans panic among conservative legislators has prompted Britain to issue a warning to LGBT travelers headed to some U.S. states, and neighborhood watch lunatic George Zimmerman is trying to auction off the gun he allegedly used to shoot an unarmed 17-year-old in 2012. Zika virus has penetrated U.S. borders, and Kylie Jenner and Tyga are officially broken up, again. What is going on with this country?? Maybe we just need to leave the continental United States for a reprieve, and head to Alaska, where a true American hero of a moose harmonized with some wind chimes and made us all forget that the country maybe isn't in the best shape, emotionally.

The mere one-minute video of this warrior of the frontier jammin' away to the chimes outside of a home in Healy, Alaska, honestly has some valuable life lessons to offer: Being alone is no reason not to have a party. Be true to yourself. If there's no wind, be the wind you want to see in the world (or something. I'm not Gandhi). Dance like no one's watching.

According to the Associated Press, which called the performance "moose-ical" (I'm inclined to agree), a woman named Britta Schroeder actually shot the video on May 4. But it didn't surface until we needed it most, which is, I guess, right now.

Schroeder told the Associated Press that she thinks the moose may be part of of family of three that had spent some time near her cabin recently, but that has been conspicuously absent since March. Well, you know what they say about how moose always make an endearing comeback at a time when an entire country is in need need of some serious cheering up. Wait, they do say that about moose, right?

Well, I know it's true. Like, earlier this year the NPR radio show This American Life presented the story of a 1,400 moose who got drunk off fermented crab apples and basically became a resident of downtown Anchorage. Rick Sinnott, the owner of a martini lounge there, discovered the moose, who was eventually dubbed Buzzwinkle, in a drunken stupor, right outside said martini lounge. He described the scene for NPR:

And I said, you know, he's too large to fit in a taxi so we're just going to leave him here until he sort of works it out. He wasn't dangerous. He was drunk, but not disorderly.

Drunk, but not disorderly. That probably wasn't the situation of our wind chime-loving moose, but it really did know how to party. Thank you, mysterious moose. You are a fearless inspiration to all. Maybe we should all focus on various moose shenanigans instead of politics until after the presidential election in November.