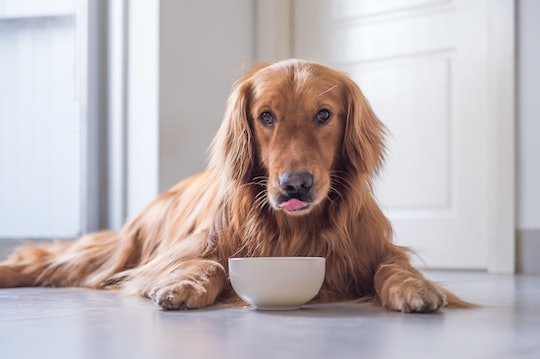 by Brianna Wiest
Jan. 18, 2019
More Like This
226,000 Smoke Alarms Sold At Walmart, Home Depot, & More Stores Have Been Recalled
The Original American Girl Dolls Are Back For Their 35th Anniversary
Thank The Moon For Your Free Taco
Therapist Says: Alone Time For Moms Is A Necessity, Not An Indulgence

Though every pet parent wants nothing more than to ensure the safety and wellbeing of their furry pals, there's been an unfortunate, and pretty serious, recall on some pet supplies, and owners should take note. Here is the full list of dog foods recalled for making animals "violently ill," and the FDA has recently expanded the recall.

The Food and Drug Administration is recalling 9 different dog foods for dangerous levels of Vitamin D, after multiple dogs experienced Vitamin D toxicity, People reported. “Testing found that samples of the dog food contained excessive, potentially toxic amounts of vitamin D,” the FDA wrote on its website about how the agency addressed the complaints. “Vitamin D is an essential nutrient for dogs, but very high amounts can cause serious health problems like kidney failure or death.”

The FDA noted that if you're concerned that your dog could have been affected by the issue, what you want to watch out for is “vomiting, loss of appetite, increased thirst, increased urination, excessive drooling and weight loss,” all of which can indicate that your pet has consumed a dangerous amount of the vitamin.

However, it's always best practice to dispose of any potentially affected goods, and the full list is available below.

The FDA has identified the following brands and makes as being the most potentially contaminated, and recommends that you do not give the food to your dog or any other animal.

If you believe that food you bought has been affected, the FDA says you can do the following in addition to not using it:

You can report suspected illness to the FDA electronically through the Safety Reporting Portal or by calling your state’s FDA Consumer Complaint Coordinators. It’s most helpful if you can work with your veterinarian to submit your pet’s medical records as part of your report. For an explanation of the information and level of detail that would be helpful to include in a complaint to the FDA, please see How to Report a Pet Food Complaint.

Unfortunately, the FDA has also noted that it's possible that more pet foods could be recalled or identified as potentially dangerous in the future, given that the list has expanded so much in just the past few days.

If you want to play it on the safe side, consider giving your pet a brand that's unlisted, or a different type of nutrition. If your pet is already beginning to display any of the aforementioned symptoms, it's imperative that you get them to a veterinarian as soon as possible to be evaluated and then potentially treated.

Though it's always scary and unfortunate to learn that some of the products you purchase for your pet could potentially be more harmful to them than you thought, what matters most is being proactive and ensuring that you take the right steps so that the problem does not get worse.