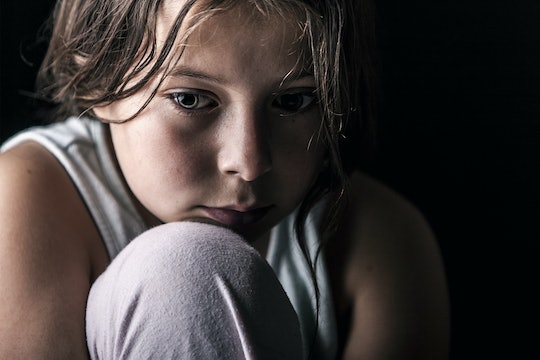 Recent statistics have shown that rates of depression and anxiety are steadily increasing among youth in the United States. More and more adolescents and teens are being diagnosed with and treated for mood disorders than in the past. But alarming new research has also revealed that more kids are contemplating or attempting suicide. And mental health professional only expect that number to continue to climb.

A recent study published in the journal Pediatrics found that the number of children being hospitalized for thoughts of suicide or attempting suicide had nearly doubled between 2008 and 2015, according to NPR. Specifically, researchers from Vanderbilt University in Tennessee analyzed billing data from 49 children's hospitals across the United States, and discovered nearly 116,000 visits among 5- to 17-year-old kids for suicide-related behaviors during the seven-year period, NPR reported.

In 2008, those hospitalizations accounted for less than 1 percent of total hospital visits, but that rate jumped nearly 2 percent in 2015, the study's findings show. The sharpest increase was seen among 15- to 17-year-old teens, who made up about half of all suicide-related hospitalizations, according to the study. Adolescents ages 12 to 14, who represented 37 percent, while 5 to 11 years old accounted for the remaining 13 percent of visits.

Lead author Gregory Plemmons, a Nashville-based pediatrician and researcher at Vanderbilt University School of Medicine, tells Romper in a phone interview that he expected to see some rise in hospitalization rates because that's what he had experienced in his own hospital work. But what grabbed his attention, particularly, was the widespread prevalence.

We were surprised that, nationwide, this is a problem everywhere. Geographically, there was no area that was unaffected.

Another surprising aspect of their findings, Plemmons says, was the association between the number of hospital visits and the timing during the school year. Combing through the data, his research team discovered a curious seasonal trend: Hospitalization rates for thoughts or attempts of suicide peaked in mid-fall and mid-spring, respectively, according to NPR. But the number of visits took a nosedive in the summer, when kids are out of school for at least three months, the study's findings showed.

Plemmons says this emerging pattern may be reflective of mounting stress students endure in order to meet higher standards placed on them by their families and teachers. He tells Romper:

Whether it's grades or academics or sports, I think students feel a lot more pressure than they used to, perhaps. And when they don't feel like they can live up to those pressures, that's where we start to see more anxiety and depression.

Why the prevalence of suicide-related hospitalizations is rising among youth is difficult to pinpoint. There's no single cause, experts say; instead, a variety of external influences, from bullying to social media, is likely what's driving the uptick in rates — albeit, indirectly. A greater awareness among doctors when it comes to identifying and treating mental health issues in children may also contribute to the increase in rates, they added.

The relationship between these factors and suicide-related behavior is complex, though. Bullying or social media use, for example, are often cited "in terms of the intersection between those issues and suicide," Phyllis Alongi, clinical director of the New Jersey-based nonprofit, The Society for the Prevention of Teen Suicide, tells Romper via phone. She continued:

I just want to be very clear that they are not causes for suicide, but they certainly contribute as risk factors.

How so? Several studies have shown that kids who are bullied are more likely to experience depression and anxiety, in addition to health issues, and poor academic performance, according to the U.S. Centers for Disease Control and Prevention. Similarly, a growing body of research has found that youth who engage in heavy social media use are more likely to be depressed, according to the University of California-Davis School of Medicine.

Depression, on the other hand, is considered among mental health professionals to be a top risk factor for suicide-related behaviors. It's estimated that about 60 percent of people who've died by suicide were also coping with major depression or some other type of mood disorder, such as bipolar disorder, according to the U.S. Department of Health and Human Services (HHS). Moreover, HHS also cited data that's shown people who received inpatient care for depression are about three times as likely to die by suicide than those treated in an outpatient setting.

And, to experts' alarm, depression among teens is on the dramatic rise in the United States. A 2017 Psychological Medicine journal found that, from 2005 to 2015, rates of depression jumped from 6.6 percent to 7.3 percent, with the most significant uptick among 12- to 17-year-old kids. Over that 10-year period, teen depression rates escalated from 8.7 percent to 12.7 percent, according to researchers from Columbia University's Mailman School of Public Health.

These increasing rates in young children and teens is very alarming to the medical community and we are working hard to understand how we can improve care for all children and especially those at high risk.

What's more: When broken down by race and gender, studies reveal that youth of color and transgender teens, respectively, are more likely to cope with depression, anxiety, and other mood disorders. In fact, a Kaiser Permanente study released last month discovered that trans youth are more often diagnosed with mental illness compared to their cisgender peers, while a JAMA Pediatrics study published earlier this month found that Black kids ages 5 to 12 are twice as likely to die by suicide than their white counterparts.

But parents can take a number of preventive and proactive measures to improve their child's mental health. Alogni recommends cutting social media use and screen time as reasonably as possible, and encouraging social interaction through community activities, sports, and the like. Parents should also educate themselves on the warning signs of depression and suicide, such as becoming withdrawn from friends, drastic changes in sleep and appetite, expressing hopelessness about the future, and discussing thoughts of suicide, among others.

There are risk factors that come together like a perfect storm and it creates this space, where, coupled with the characteristics of suicidal thinking, with a triggering event, someone could get stuck in the tunnel of crisis thinking, and then suicide becomes an option.

Not every child can — or wants to — open up to their parents about their issues and feelings, though. For parents struggling to connect with their kids, experts suggest they find a peer or another adult who their teen trusts and can turn to in a time of need, making sure, without interfering, that that support is available consistently. There are also texting helplines and mental health apps that can act as effective alternatives to traditional therapy and immediate crisis response, Plemmons says.

Above all else, though, parents need to have open and honest conversations with their kids about mental health, experts say. It could be as simple as asking your middle schooler to tell you about their day, or as complex as working through thoughts of self-harm and suicide with your teenager in crisis.

It can be very scary for parents if they have a child who is being treated for these issues, but attempting to be as open and non-judgmental as possible, letting the child know that they are supported and will be helped is always a good message.

Of course, beginning a dialogue — one that's both supportive and validating — is not contingent upon whether signs of depression or other mood disorders are present. These conversations can — and should — start as early as the toddler years, experts say, so parents are able normalize a topic that is often stigmatized in society.

"The worst thing you can do is sweep things under the rug," Plemmons tells Romper.

The experts do recognize, though, that discussions around mental health can be uncomfortable for many parents. After all, some still believe that merely mentioning suicide will somehow encourage suicide-related behaviors, they say — a myth that scientific literature does not support. But it's important that, before opening the conversation, parents check their own bias against mental illness so that they are creating a safe space for their child.

That means parents should reach out to their own health care provider to work through any concerns or internalized stigma they may have. They could also turn to available resources online, such as the American Academy of Child & Adolescent Psychiatry a free "Facts For Families" guide, inclusive and medically-accurate information on mental health-related topics.

"It's difficult not to have grown up without having internalized the stigma around mental illness," Hartselle tells Romper. But parents who seek out help to better understand the issues can make it "a less frightening topic when they go to speak to their own children."