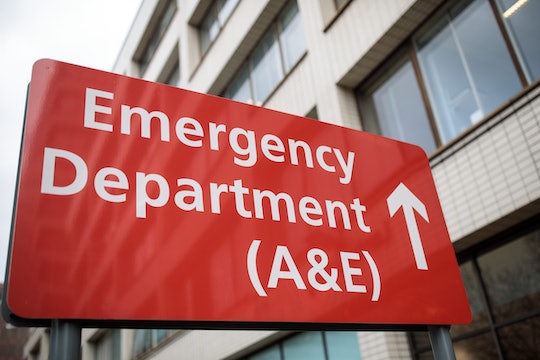 Many parents have been there — you’re peacefully watching television or packing tomorrow’s lunch when, suddenly, your toddler goes from quietly playing to causing chaos as he or she reaches to put anything and everything into his or her mouth. For some unfortunate parents, their children’s games of "let’s see how many things we can swallow in under a minute" lands them in the emergency room. In fact, new research shows that more kids are going to the ER after swallowing things ranging from coins to toys, and beyond.

A study published in the journal Pediatrics found that the number of kids who went to emergency rooms in the United States as a result of ingesting a foreign object almost doubled from 1995 to 2015. The study, which reviewed nearly 30,000 actual cases, shows that the annual rate of foreign body ingestions per 10,000 children went up 91.5 percent over two decades. There were almost 43,000 hospital visits as a result of ingesting a foreign object in 2015, as compared to the 22,000 in 1995, USA Today reported. Additionally, about 759,000 children younger than 6 years of age were estimated to have swallowed foreign objects over the period of time studied, according to the study's video abstract.

According to the research, boys more frequently ingested objects, at nearly 53 percent, as did 1-year-olds.

Among the most common types of objects ingested were coins, toys, jewelry, and batteries, the study found.

The high number of the children swallowing foreign objects is most likely due to an increased use of button batteries in electronic devices, according to Dr. Danielle Orsagh-Yentis, the lead author of the study and a pediatric GI motility fellow at Ohio’s Nationwide Children’s Hospital, as she said in the study's video abstract.

“Children have easy access to these objects and children in this age group explore the world by putting things in their mouths,” Dr. Orsagh-Yentis said in the video abstract. “Data shows that advocacy and regulations are effective.” She suggested that parents work hard to keep dangerous products out of children’s reach and preemptively learn what to do if your child has ingested something.

The American Academy of Family Physicians (AAFP) suggests keeping small, sharp objects, especially batteries, out of children’s reach. The organization also recommends that parents and older siblings make sure children do not play with toys that have small parts that can come off.

If you think your child may have swallowed batteries, something sharp, or something made of metal like a coin, it is best to take him or her to the doctor right away. If you think your child swallowed something small that isn’t sharp or metallic, like a plastic bead or button, AAFP says it might not be necessary for you to call the doctor immediately. However, it is important to get medical attention if your child shows symptoms including vomiting, gagging, drooling, stomach pain, coughing, wheezing, or not eating. Even if they don't seem to have any symptoms, AAFP suggests that you seek medical attention of some sort within 24 hours, just to be sure that there's no danger.

South Australia's Child & Youth Health site warns that though small objects can sometimes pass through a child's system without causing any sort of damage, other objects may get stuck. Some objects, like batteries, can even cause serious harm to a child's gut. The site stresses the importance of child-proofing your home "as soon as your baby starts to move around."

This study makes it even more of an imperative for parents to remain extra vigilant and take necessary precautions to prevent their children from reaching for the next object that comes into their small hands. At worst, swallowing things can really harm them, but, well, even if what they swallowed isn't going to hurt them, it's definitely going to take a bit of time to show up again.

More Like This
What Is RSV?
Are Babies Lonely In The NICU? Here’s What Experts Say
How To Get Boogers Out Of A Baby's Nose
Can You Mix Breast Milk & Formula? Experts Weigh In