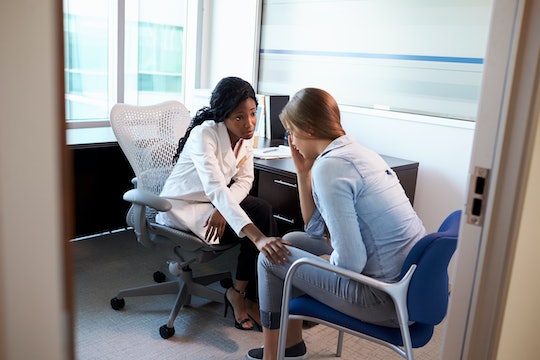 As a mom, it can feel like the times have never been more challenging than right now when it comes to raising a healthy, happy child. News this week revealing that thoughts of self-harm among kids are more common than 10 years ago or more sure doesn't help me feel better about the high stakes of today's parenting. More kids are going to the hospital with suicidal ideation, according to a new study... and this is truly frightening.

As Scary Mommy reported, a new study published in the medical journal JAMA Pediatrics, showed that suicidal thoughts in kids under 18 jumped from 580,000 cases in 2007 to 1.12 million in 2015. That's a genuinely sharp increase — this tragedy doubled.

What's more, the average age of those being evaluated for suicidal ideation or attempts was a mere 13 years old. Even more scary, 43 percent of patients were between the ages of 5 and 11. This dovetails with a rise in suicide and suicidal thoughts in general in the United States, as the Washington Post reported.

"The numbers are very alarming," Dr. Brett Burstein, M.D., head author of the study, said, per CNN. "It also represents a larger percentage of all pediatric emergency department visits. Where suicidal behavior among the pediatric population was just 2 percent of all visits, that’s now up to 3.5 percent."

As CNN noted, Burstein and his fellow researchers looked at data from the National Hospital Ambulatory Medical Care Survey, which is overseen by the Centers for Disease Control and Prevention.

The researchers took a closer look at the number of kids ages 5 through 18 who'd been diagnosed with suicidal ideation or attempts each year at a sample of 300 hospital emergency rooms to reach their conclusions.

Suicide is the second leading cause of death among Americans ages 10 to 18, accord to the study's abstract. And Fatherly noted that the news follows findings from the American Academy of Pediatrics that the number of kids visiting the ER for "psychiatric reasons" increased about 28 percent between 2011 and 2015.

Exactly why kids are feeling enough sadness, stress and pressure in what used to be considered the most carefree time of your life is the real question, of course.

CNN also noted that the United States has a serious shortage of pediatric mental health providers, with stats showing there are 17 providers (or fewer) available per 100,000 children.

Not to mention what I've seen, living in a big city: Some specialists don't take any insurance at all anymore, meaning if there is a proper mental-health specialist for your child, they may not be financially accessible to the average family.

This all makes me, as a mom, personally angry. But there are spots of hope: Suicide prevention and mental-health awareness have become big topics among some influential game-changers and celebrities from Prince Harry (and his brother, Prince William) to Lady Gaga, Hayden Panettiere, and Zayn Malik, according to Sky UK.

After calls to suicide hotlines spiked last year after several celebrity deaths, as the Wall Street Journal reported, it seems more clear than ever that our country is in a true mental health crisis.

But at least these discussions and studies show us what needs to be done: Mirror mental wellness for our kids so that, when they do encounter challenges, big or small, they will know that there's always hope, and always help, available.