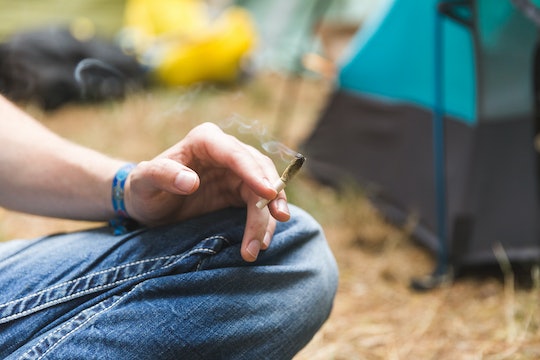 More Parents Are Smoking Pot Around Their Kids, Study Finds, Despite The Health Risks

Over the last 15 years, cigarette smoking among parents had decreased significantly, reducing the amount of harmful secondhand smoke kids are exposed to. But new research has suggested that the same can't be said for secondhand marijuana smoke. That's because researchers based in New York have found that more parents are smoking weed around their kids than they did more than a decade ago.

A new study published Monday in the journal Pediatrics found that fewer parents who have kids in the home are smoking cigarettes, but pot use among those parents that do smoke tobacco has seen an uptick, according to USA Today. Specifically, researchers behind the study found that among cigarette-smoking parents, the number of those who also smoke weed increased about 6 percent over a 13-year period — from 11 percent in 2002 to more than 17 percent in 2015, USA Today reported.

Incidentally, there was also a small rise in marijuana use among parents who didn't smoke cigarettes — from 2 percent in 2002 to 4 percent in 2015, according to the study. But, overall, the researchers found that using cannabis was nearly four times more common among tobacco-using parents than their counterparts, according to USA Today.

Lead researcher Renee Goodwin, a professor with the City University of New York, said of the findings, according to U.S. News & World Report:

As we are removing cigarette smoke — and that's a major public policy achievement — that success will be attenuated by increasing exposure to secondhand marijuana smoke. The kids who are already exposed to one thing, they're more likely to be exposed to both. It's even worse for them.

In fact, a Colorado study presented earlier this month at the Pediatric Academic Societies annual meeting found that kids are more likely to visit the emergency room or have an ear infection if they're exposed to both secondhand cigarette and marijuana smoke, according to HealthDay. In particular, the research showed that children living in homes with pot and cigarette smoke had an average of two-and-a-half ER visits in a year, while kids not exposed to smoke at all had an average of two visits per year, HealthDay reported. Children exposed to both were also 80 percent more likely to have an ear infection, the study's findings showed.

Very similar compounds are being released in marijuana smoke as in tobacco smoke. You would theorize the same kind of chemicals the kids are breathing in to cause diseases from tobacco smoke should be very similar with marijuana.

Some early research on rats has shown that, on its own, inhaling secondhand marijuana smoke can have the same physiological effects as inhaling secondhand cigarette smoke, according to NPR. The animal study, conducted by biologist and professor Matthew Springer, found that the arterial walls in rats exposed to constant marijuana smoke became permanently damaged, which could lead to blood clots, stroke or heart attack, NPR reported. What's more: Their arteries took 90 minutes to recover, whereas it takes 30 minutes with tobacco products.

Of course, Goodwin notes, this isn't a case to keep marijuana illegal, according to HealthDay. After all, parents drink in front of their kids all the time, and that can have profound negative effects on a child's emotional and physical health. Instead, it's more of a matter of expanding the public messaging around the dangers of secondhand smoke to extend to marijuana smoke.

Goodwin said, according to HealthDay:

There is counseling and advice for folks on having their children avoid cigarette smoke, but no one is being advised on what to do about marijuana smoke.