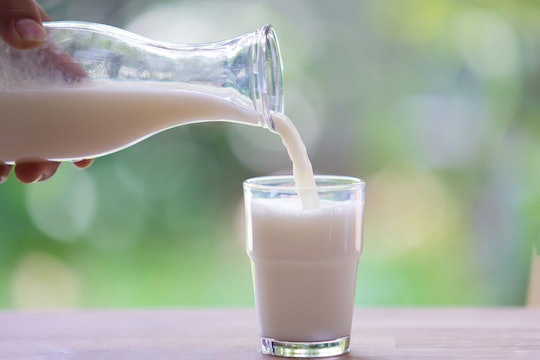 More People Think They Have Food Allergies Than Actually Do, New Study Finds

Most people know at least one person with a food allergy, ranging from the type that are mildly uncomfortable to the more severe. Food allergies can be really serious, but are they as common as they seem? According to new research, more people think they have food allergies than actually do. But, don't go around trying to test your friends by feeding them certain foods. It seems that people aren't lying, but just mixing up intolerance and allergies.

There are eight common food items that cause about 90 percent of allergic reactions, according to WebMD: milk (but usually in kids), eggs, peanuts, tree nuts, soy, grains containing gluten, fish, and shellfish.

It's currently thought that up to 15 million Americans have food allergies, according to Food Allergy Research and Education (FARE). However, according to FARE, the Centers for Disease Control & Prevention reported that food allergies in kids have risen 50 percent between 1997 and 2011.

Researchers led by Dr. Ruchi Gupta, MD, MPH, from Ann & Robert H. Lurie Children's Hospital of Chicago and Northwestern University, as reported by EurekAlert!, used a nationally-representative survey of more than 40,000 adults to look at this issue more closely, and found that fewer people truly have full-blown food allergies than think they do and even fewer have an actual diagnosis.

It's not that people are lying, but they're mixing up the differences between food intolerance and food allergies. "While we found that 1 in 10 adults have [a] food allergy, nearly twice as many adults think that they are allergic to foods, while their symptoms may suggest food intolerance or other food-related conditions," Gupta said, according to Medical News Today.

A food allergy causes your immune system to react, impacting multiple systems of the body, according to the Mayo Clinic, whereas people with a food intolerance can eat small amounts of the food in question without experiencing severe symptoms.

Lactose intolerance is a good example. You may be able to eat a little bit of dairy, drink lactose-free milk, or take lactase enzyme pills to help offset things, as the Mayo Clinic noted. With a food allergy, though, WebMD noted that your body will react to the proteins in milk as if your immune system needs to fight off a threat — no matter what. This can result in rashes, hives, swelling, a feeling of tightness in your throat, and more, according to WebMD.

The study did find that allergies are still common and often severe in U.S. adults, with the study's abstract noting that some can start in adulthood. So just because you didn't grow up with allergies doesn't mean that you've gotten off scot-free.

"Our data show that shellfish is the top food allergen in adults, that shellfish allergy commonly begins in adulthood, and that this allergy is remarkably common across the lifespan," Dr. Gupta said, according to EurekAlert!, "We need more studies to clarify why shellfish allergy appears to be so common and persistent among U.S. adults."

For any adults who think they have an allergy, researchers, in the study's abstract, urged them to receive proper diagnosis. That way, adults can better understand what's going on with their bodies and avoid unnecessarily cutting some foods out of their lives.